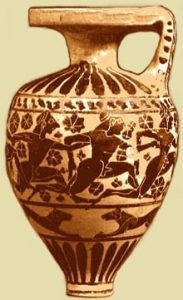 A foot race in ancient Greece

Would a day of “Greek Olympics” work for you? Here are some suggestions for that.

Maybe the most important difference between our own Olympics and the ancient Greek Olympics is that no women were allowed to compete, or even to attend, the ancient Olympic games. You’ll probably want to have the girls run too! But you might want to start with a discussion of how things have changed since that time, and why. When did women begin running in the Olympics? How did that happen? (Not until the second modern Olympics, and then only gradually and with difficulty. There’s a book about it, called “A Proper Spectacle”). You might also discuss whether in your own Olympics the girls should be separated from the boys, and if so, why, or if not, why not?

But you’ll want to run races too! The Greeks didn’t have as many events as we do today- they ran short foot races for the most part, and they also had discus-throwing (you could substitute a Frisbee) and wrestling and a long jump. Finally there were chariot races – you could have a bike race, or a wheelbarrow race (where one kid is the wheelbarrow and the other is the driver).

The Greeks didn’t award big money prizes; just olive wreaths, and food. You can save some trouble by doing the same thing (although modern kids may expect medals).

Afterwards, it would be great to have a discussion about why the Greeks wanted to have these competitions, and how they thought the gods loved to see men compete against each other. (More on this idea)