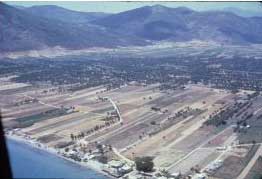 The Persians were attacking Greece! They landed at Marathon in the fall of 490 BC. When the Athenians heard that the Persians had landed, the citizens (the free men) met in their assembly to decide what to do.

Who were the Persians?
Classical Greece
The Ionian Revolt
The First Persian War
All our ancient Greece articles

Should Athens fight or surrender?

Athenian democracy
What is an oligarchy?
Athens in the Classical period

The democracy was new, and nobody had ever tried to run a war with a democratic government. Who even knew if it was possible? But when they voted, the Athenian men decided to keep their democracy, and to fight back against the Persians. 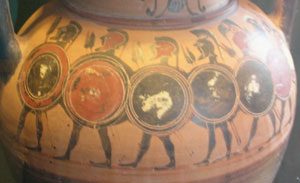 The Athenians march to battle at Marathon

So the Athenians got together their army and marched out to meet the Persians. They would have been safe behind the big stone walls of their city, but they chose to march out to battle anyway.

What is a hoplite phalanx?
Greek hoplites and democracy
War in ancient Greece

Maybe the Athenians were afraid someone would open the door for the Persians the way it had happened in Eretria. Or maybe they had a lot of faith in their well-trained and well-armed hoplite army, which was much better than the old-style Persian army.

Pheidippides and the Battle of Marathon

Pheidippides and the Battle of Marathon
On to the Second Persian War
Ancient Greece
Quatr.us home