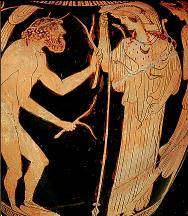 Athena in the Odyssey: Odysseus and Athena, on a red-figure vase

Athena in the Odyssey

In the Iliad and the Odyssey, Athena was on the side of the Greeks, because she hated the Trojans. Athena hated the Trojans because Paris was a Trojan and he had voted against her in the Judgment of Paris.

Among the Greeks, Athena liked Odysseus especially because he was smart and cunning and tricky, and Athena is the goddess of wisdom. She helps Odysseus whenever she can. When Odysseus gets back to Ithaca, for example, Athena disguises him as a beggar so he can figure out a plan to defeat the suitors.

Learn by doing: make a shield like Athena’s
More about the goddess Athena

Bibliography and further reading about Athena:

We Goddesses: Athena, Aphrodite, Hera by Doris Orgel and Marilee Heyer. With a more feminist view.

Greek Religion, by Walter Burkert (reprinted 1987). By a leading expert, for adults. He has sections on each of the Greek gods, and discusses their deeper meanings, and their function in Greek society.