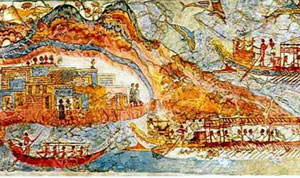 The oldest paintings in Europe are cave paintings from Western Europe, but the Greeks probably learned to create art not from the cave paintings but from West Asian and Egyptian artists who lived closer to them. Stone Age Greek artists concentrated on pottery; they didn’t produce any paintings that we know of. In the Bronze Age, Greek art starts off on the island of Crete, where the Minoans took Egyptian and West Asian themes. Minoan artists, for example, copied an Egyptian theme of raiders attacking a town in boats and defenders drowning. 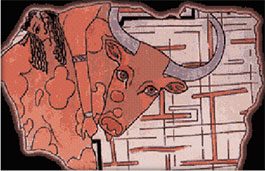 But Minoans added their own twists; they were much more interested in the ocean and ocean creatures like dolphins than the Egyptians were, and the Minoans also illustrated their own games, like bull-jumping. Egyptians liked Minoan art enough that they brought Minoans to Egypt to decorate a Hyksos palace about 1600 BC. Other Minoan painters seem to have been working in Israel at the same time. 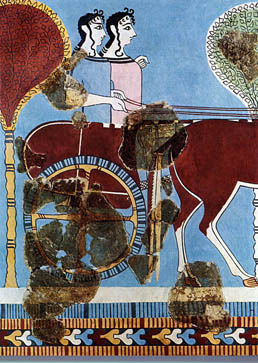 From Crete, painting came to the Greek islands, where people copied the Minoan themes, but in stiffer, less natural forms. On the Greek mainland, Mycenaean painters copied their ideas from the islands, and sometimes they seem to have not really understood what they were copying. They, too, added their own interests: horses, hunting, and chariots, mostly. 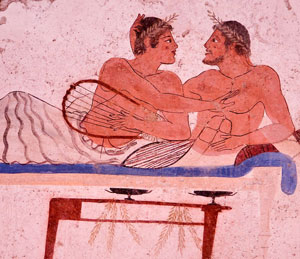 After the Greek Dark Ages, though, Greek painters gained confidence and began to lead instead of following. They experimented with clean, simple compositions instead of the complicated Assyrian ones, and they began to learn to show the muscles and bones of the human body realistically. By the time Cyrus the Great conquered West Asia to create the Persian Empire, he and his successors hired many Greek artists to decorate the Persian palace at Persepolis. Two hundred years later, when Alexander in turn conquered the Persian Empire, there was no longer much difference between Greek art and West Asian art.

Learn by doing: paint a picture of pirates attacking a town
Minoan and Mycenaean Painting