How to build a pyramid – Ancient Egypt 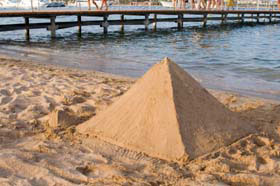 Ancient Egyptian pharaohs, like Mayan lords, built pyramids because they’re a pretty easy shape to build. Pyramids are especially easy to build if they are mostly solid piles of dirt or stone. That’s what the early pyramids were like: mostly solid.

Build a pyramid out of sand

Check out how easy it is to build a pyramid for yourself next time you go to the beach, or a playground with a sandbox. Get the sand a little damp (not too wet). Then try packing it into the shape of a pyramid. Do you at first get a step pyramid or a bent pyramid, as the Egyptians did?

Keep trying!  Can you get your sand into a nice straight pyramid after some practice? Why or why not?

Or maybe a Mesopotamian ziggurat

For a more Egyptian pyramid, build a little house out of sticks or stones – a mastaba – and then build your pyramid on top of that. Or, try building a Mesopotamian ziggurat. That’s like a pyramid, but built in a series of platforms, each one a little smaller than the one below it. On one side, carve a long staircase going up to a little temple on the flat top.

How did your pyramid project work out? Let us know in the comments! Send pictures!