How Anansi taught people to farm 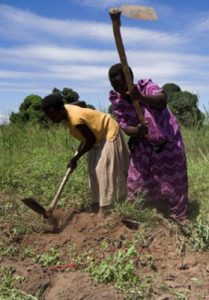 This is a story people in Africa tell about how Anansi the spider taught people how to farm. In the beginning, according to the story, people didn’t know how to farm. They had to get their food from the wild, hunting it and gathering it. At that time only Porcupine had a hoe. Only Porcupine knew how to farm.

But Anansi the spider and his children went to live with Kotoko, the Porcupine, for a while. Anansi and his children watched Kotoko the Porcupine use his hoe. They saw how Porcupine hoed his field. Over and over again, Porcupine lifted his heavy hoe and slammed it down into the ground. Then he pulled up the hoe, loosening the earth so he could plant seeds in it later. The seeds couldn’t grow in hard, dry dirt – they needed a soft cushion of loose dirt in order to grow into plants that people could eat.

Now when Porcupine went home to eat his lunch, he hid his hoe. But Anansi found the hoe and took it; he took it away and used it. That is how people got hoes.

Although this story makes it seem like it was mostly men who used hoes and did the farming in Africa, it’s more likely that mostly women did the hoeing and planting. Among early farmers, men spent more of their time fighting wars.

You might want to compare this African story to the Greek story of Demeter or the Mayan story of Maize Mountain.