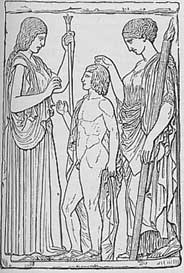 Eleusinian Mysteries: Demeter, Persephone, and Triptolemos (the boy), an 1899 drawing from a stone carving found at Eleusis .

When did the Eleusinian Mysteries start?

Beginning at least as early as the Late Bronze Age (about 1400 BC) and maybe much earlier even than that, the people of Eleusis in Greece celebrated a holiday there every year.

What are mystery cults?
Greek religion
All our ancient Greece articles

What did the holiday celebrate?

The Eleusinian Mysteries celebrated the time when the goddess Demeter gave wheat and barley to the people to eat.

Who was Demeter?
History of wheat
Where does barley come from?

According to the Greek story, when Demeter was searching all over the world for her kidnapped daughter Persephone, she came to a house where she asked to stay the night as a guest.

Demeter and Persephone
Guests and hosts in Greece

Her host, Celeus, was very welcoming. He was so friendly that Demeter wanted to give him a reward. Demeter thought she would reward Celeus by making his son Demophon immortal, so she began burning away his mortality in the fire every night.

But one night Demophon’s mother Metanira came in and was horrified to see her baby burning in the fire. Metanira snatched her baby away from Demeter, and that was the end of that.

So Demeter thought she would reward Demophon’s twin brother Triptolemus instead. She taught Triptolemus how to grow wheat and barley, and lent him a winged chariot so he could fly all over Greece and teach people everywhere how to grow grain. (Compare this to the African story of Anansi teaching people to farm, or the Mayan story of Maize Mountain.)

How did you celebrate the Eleusinian Mysteries? 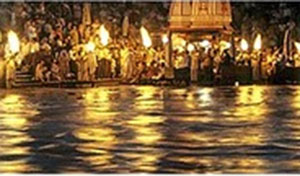 The celebration itself was part of a mystery cult known as the Eleusinian Mysteries. It began in the evening, with crowds of people, all dressed in plain white tunics. They had a torchlight parade down to the beach. Then they all waded out into the water with their torches. That must have been very beautiful to see!

After the bathing, the crowd of people walked back to town and went inside the big temple of Demeter at Eleusis. There the priest showed them the sacred objects. But we don’t know exactly what the sacred objects were, because this was a secret known only to people who had actually been there. Probably the priest showed them a sheaf of wheat, but maybe there were other things too.

Bibliography and further reading about Eleusis:

Ancient Mystery Cults, by Walter Burkert (reprinted 1989). More about Demeter at Eleusis and other mystery cults.

Eleusis and the Eleusinian Mysteries, by G.E. Mylonas (1961).

Watch out! On Demeter, there are a lot of books which are more neo-pagan religion, or Freudian theory, than they are historical facts. The books we recommend have been selected for their strict historical accuracy.