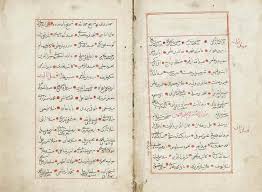 Ottoman literature: A copy of one of Mustafa Ali’s books, from about 1600 AD

Despite the lack of printing presses, some writers and historians continued to work in the Ottoman Empire. In the 1500s, Mustafa Ali, a court bureaucrat, wrote poetry and religious essays. İn the 1600s, Ibrahim Pecevi wrote a detailed history of the Ottoman Empire, using European as well as Arabic and Turkish sources, and Munejjim Bashi wrote a history of the world, again using Roman and European sources. He was the first Islamic historian to write about the Assyrians, the Babylonians, and the Seleucids, using mainly the Jewish Torah as his source. Ottoman poets also wrote poems full of symbolism and metaphor. They imitated Iranian poets writing in the Safavid Empire further east.

The first Ottoman novels in the late 1700s

In the late 1700s, just as novel-writing was getting going in Europe with Daniel Defoe’s Robinson Crusoe and Voltaire’s Candide, Ottoman writers were also aware of the new form. In 1797, Ali Aziz Efendi – the Ottoman ambassador to Berlin – wrote an early novel, Muhayyelat, using elements from the Arabian Nights.

But as this short list of writers shows, the lack of an audience meant that Ottoman writers had a very hard time making a living from their writing. Not enough people knew how to read, and most people were too poor to afford any books, or to send their children to school. Writers had to have a day job – another way of making a living. Usually they were government employees. Ottoman writers knew that Europeans were writing and reading a lot more books, but they couldn’t get there themselves. There were not enough writers, or enough readers, to create a real literary community in the Ottoman world.

In the 1800s, the Ottoman government encouraged writers as part of their effort to Westernize. French colonizers encouraged Ottoman writers to produce Turkish books like those that French writers were producing at the same time. In 1860, Ibrahim Sinasi wrote the first Turkish play, “The Poet’s Marriage”. In 1872, Semsettin Sami published the novel, Tal’at and Fitnat In Love. But with most of the Ottoman people still too poor to go to school, there still weren’t enough people to read or buy Turkish books. Writers still had to depend on government jobs or government patronage.

Printing in the Ottoman Empire
The Ottomans

More about the Ottomans
More about West Asia
Quatr.us home