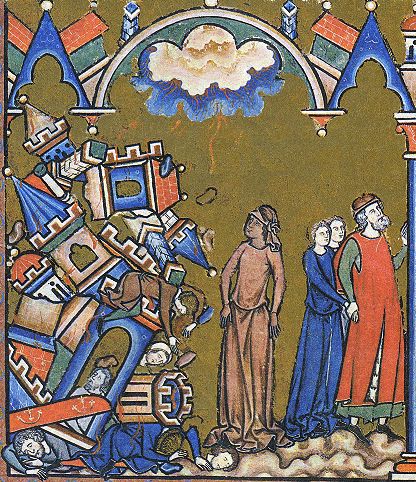 One story from the Bible about how nomads were good and cities were bad is about the cities of Sodom and Gomorrah. In the time of Abraham, after the Jews had moved to Canaan, some Jews settled down to farming and began to live in cities. A man named Lot, who was a nephew of Abraham, decided to live in Sodom because he could get good grass for his sheep near there. (This would have been about 2000 BC, if it really happened).

But the people of the cities got more and more greedy and selfish. They would not share what they had with the poor, or even with guests. So God told Abraham he had decided to destroy the cities of Sodom and Gomorrah. Abraham was shocked, and begged God not to kill all those people. God finally agreed to leave the cities alone if Abraham could find fifty good men there, but Abraham couldn’t find that many. God went down to forty-five men, then to thirty, or twenty, or even ten men, but Abraham couldn’t find even ten good men in the city (women didn’t count in this story, except to be killed).

There was only one good man in the city, and that was Lot. So God decided to destroy Sodom and Gomorrah, but he agreed to save Lot. God sent two angels in disguise to warn Lot to leave town, but that night when the angels were in Lot’s house, the bad men of Sodom came to Lot’s house and demanded that Lot turn his visitors over to them, so the bad men could torture them. Lot wouldn’t do it, because a good man never mistreats a guest. Instead, Lot offered the bad men his own daughters to torture, if they would leave his guests alone. Luckily for Lot’s daughters, the bad men refused Lot’s offer, and so God struck them blind.

In the morning, Lot and his wife and daughters and slaves left Sodom. God told them not to look back, but at the last minute Lot’s wife did look back, so God turned her into a pillar of salt. And he destroyed the cities of Sodom and Gomorrah with fire and brimstone.

Go on to Jacob and Joseph
Go back to Abraham

Go on to Jacob and Joseph
More about Judaism
Quatr.us home