Apollonius of Tyana (or some other holy man)

Closer to the gods

Of course a lot of people claimed to have these powers, but (people thought) only some of these people really did have special powers. The trick was in being able to tell the fakes from the real holy men. It would be awful if you brought your sick child to a fake holy woman instead of a real one. So people spent a lot of time worrying about how you could tell.

How can you tell?

There were a whole lot of generally accepted ways of knowing if you were dealing with a real holy man or a fake one. Not all holy men had to have or do all these things, but they had to have a bunch of these qualifications.

First. people thought that the birth of a holy man or woman should be announced ahead of time somehow, like with a message from the gods. Also, a holy man should have some kind of special birth. Apollonius of Tyana, for instance, was born in a meadow during a thunderstorm. Holy men should come from rich families, not poor ones. In India and China, people like this might become known as boddhisatvas. In medieval Islamic areas and Europe, they were saints.

Who are boddhisatvas?
Christian saints 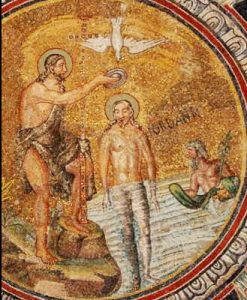 John the Baptist baptizes Jesus, in the Orthodox Baptistry at Ravenna, 451 AD

Then while he was growing up, a holy man should be unusually smart and athletic for his age. And he should be a natural leader. And he should speak very clearly, with a good accent. He should have a good education. He should travel and learn from people in different places. Or, sometimes there was something else special about him, like he might be blind or have epileptic fits. 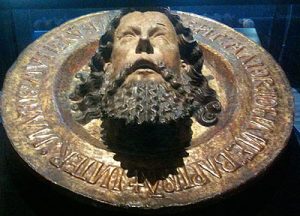 Once he was grown up, a holy man should choose to give away most of his money and live very simply. He should wear simple clothes and grow his hair long and go barefoot or wear sandals. He might go for years at a time without speaking.

Generally it showed that someone was a real holy man or woman if she was persecuted by the king or the government, the way John the Baptist had his head cut off by Herod.

In any case, some kind of special death also helped to convince people that a person was holy. Apollonius, for instance, is said to have simply vanished instead of dying.