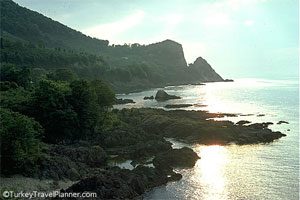 The Black Sea was originally a fresh-water lake. In the Stone Age, many people lived around the edge of this lake. But around 7000 BC, as the world came out of the last Ice Age and all the glaciers melted, sea level rose. The Mediterranean Sea spilled over the little bit of land that separated it from the Black Sea, and the Black Sea became salty. 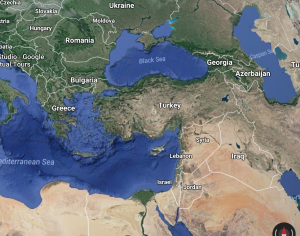 People know very little for sure yet, though. Nobody knows yet what the effect was on the people who lived there – the ancestors of the Indo-Europeans or Yamnaya. The rise in the level of the Black Sea was probably NOT the origin of the story of Noah’s Ark, though.

Learn by doing: find the Black Sea on a globe
More about the West Asian environment

Bibliography and further reading about the Black Sea:

Noah’s Flood: The New Scientific Discoveries About The Event That Changed History, by William Ryan and Walter Pitman (2000). This lays out the argument for a connection between the Black Sea flood and Noah – be warned that most scholars don’t agree with them.

The Black Sea: A History, by Charles King (Oxford, 2004). This one isn’t about the sudden rise in water levels, but begins with the Greeks and Scythians and goes up to modern times.