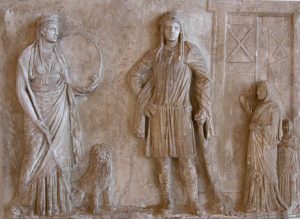 Cybele and Attis standing together, while two much smaller human worshippers pray to them. From the Hellenistic kingdoms, in what is now Turkey, in the 100s BC

Cybele was also called Magna Mater or the Great Mother. She was a West Asian fertility goddess like Isis or Demeter. You sacrificed to Cybele to make sure the wheat and barley would grow well.

More about Isis
What is sacrifice?
West Asian religion
All our West Asia articles

There are many versions of this story. But according to Ovid‘s story in the Metamorphoses, Cybele fell in love with a beautiful young man. The man’s name was Attis, and he lived in Phyrgia. Today, that’s in south-west Turkey.

Cybele demanded that Attis be completely faithful to her alone. But a nymph (like a fairy) called Sagaritis kept trying to get Attis for her boyfriend. Sagaritis eventually did convince Attis to get with her. Cybele was super angry when she found out. She killed the nymph. And Cybele made Attis go crazy. He went so crazy that he cut off part of his body. He died, and grew again as an evergreen pine tree.

Bibliography and further reading about Attis and Magna Mater: