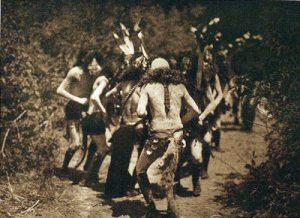 There were many different groups of people living in North America. They spoke different languages. They had different kinds of houses and clothes. But they still all had some religious ideas in common. For instance, pretty much everyone in North America had a creation story about how the earth was made and how their people got to be on the earth.

Most people also thought that there was an all-powerful god that you should worship. They also believed in a lot of less powerful gods. They thought that a bad god (or devil) who brought sicknesses and suffering and death. All along the eastern and middle parts of North America, people celebrated the Green Corn harvest festival. And most people thought that after you died your soul went to a better place where you would be happy, like the Christian heaven.

Most groups thought that you could get things you wanted by praying for them. Or you could sacrifice food, tobacco, furs, or other valuable things. Sometimes people prayed or sacrificed on their own. Other times, they got the help of a priest or priestess. Priests and priestesses were especially important for predicting the future and bringing good weather. They could bring rain when you needed it for the corn, and sunny weather otherwise. Priests also helped you to interpret your dreams. And they could find witches who were putting curses on you.

Like people in ancient Greece and Rome, and like people in Africa or in India, most people in North America thought that all plants, animals, and objects like rocks or fishing nets or spears had spirits living in them or controlling them. So it was important to stay on good terms with your tools and the trees and streams around you.