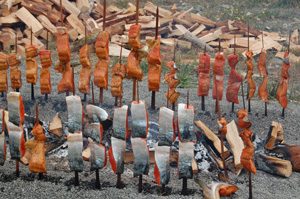 People in the Pacific Northwest like the Chinook and the Nez Perce did not farm or keep animals. There was always so much fish that nobody needed to start farming and they could just keep on fishing for their food.

History of fishing
Who were the Chinook?
More about the Nez Perce
All our Native American articles

What did Chinook people eat besides salmon?

Mostly Chinook and Nez Perce people ate wild roots like wapato (it’s like a potato) and huckleberries (like small blueberries), and a lot of dried or roasted salmon that they caught in the Columbia river and other rivers that ran into the Columbia.

How did they cook salmon?

When Chinook and Nez Perce people got home from gathering and hunting and fishing trips, they cooked their food in the longhouse.

Each family had its own small fire in the longhouse. To roast the salmon, Chinook and Nez Perce people put the salmon into a split cedar wood stick that held the salmon tight like a clothespin, and stuck the wooden stick in a sand pit near their fire. 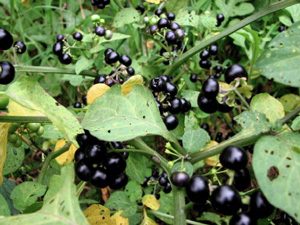 How did they cook wapato?

To boil their wapato, Chinook and Nez Perce people put the roots in a wooden box or a basket that would hold water, and they put water in too.

Then they heated rocks in the fire and dropped them into the water to heat up the water and cook the roots. You could boil water this way, though it would take a long time.