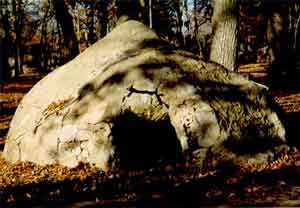 Most people who lived in the Cherokee nation lived in houses that were just for one family. These houses were usually circular.

They were made of tree branches bent into a circular shape and then plastered with mud (the frame was a lot like the frame of a Ute wickiup, but these were different because they were covered with mud and partly sunk into the ground like Pueblo pit houses). These houses usually had a stone hearth in the middle for a fire to cook on and to keep the house warm.

In these small houses (about 25 feet across), and in the South where the Cherokee lived, even a small fire kept the houses so hot that early Europeans complained about how hot (and smoky) it was inside them. There was a curved front hall too, so cold air didn’t come into the main room as soon as you opened the door.

All around the edges there were wicker beds, with deerskins and woven hemp or beaten-bark blankets. People used the beds as benches during the day. Clothes were expensive, and a lot of people didn’t have any (kids under ten generally didn’t wear clothes). It was cheaper to heat these houses than to make warm clothes for everyone in the winter.

Cherokee basket from the 1700s AD

There would also have been a lot of baskets, to hold things, both on the floor and hanging from the ceiling, and tools stored on hooks on the walls. Colorful woven reed mats covered the walls and maybe also the floor.

Some Cherokee people lived in different houses in the summer. The summer houses were bigger, because you didn’t have to keep them warm, and they had more windows. Sometimes several related families lived together in the summer house, as you do when your family rents a house at the beach in the summer.

Why do the seasons change? 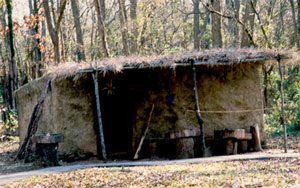 Cherokee towns all had a meeting house or council house as well as people’s own houses. The meeting house was also round, with a big hearth in the middle, but it was much bigger than ordinary houses. These meeting houses were often built on top of earth mounds.

Cherokee towns also had solid fortification walls around them built of thick logs placed upright next to each other all the way around the village, with a wooden walkway at the top that men could walk around on to shoot arrows out at their attackers.

Who invented bows and arrows?

Learn by doing: build a model of a Cherokee house
Cherokee architecture after Europeans invaded
More about the Cherokee people