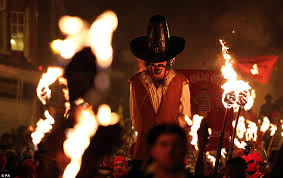 Carrying a puppet of Guy Fawkes to burn him

There’s a famous verse about Guy Fawkes’ plot to blow up the King of England and the Houses of Parliament in 1605, and it goes like this:

Remember, remember the Fifth of November
Gunpowder, treason and plot.
I see no reason why gunpowder treason
Should ever be forgot.

To remember Guy Fawkes Day, people in Britain celebrate the fifth of November every year as a holiday even today. They build bonfires, set off fireworks, and sometimes hang or burn stuffed images of a man called a “Guy”.

Whose side are you on?

As one part of your project, discuss how you feel about that. Guy Fawkes was trying to blow up the Houses of Parliament because they felt the King had too much power, and the rich lords didn’t have enough power. Do you think you would have been on the side of the king, or on the side of the lords? Guy Fawkes failed, but the lords kept trying. After King James died, they succeeded in killing his son, King Charles. That led to the first Commonwealth or Republic in England. The United States got a lot of its ideas from that Commonwealth, for our government.

That is, Guy Fawkes was on the same side that men like Thomas Jefferson and George Washington and Alexander Hamilton were on later. Like him, they fought against the King of England.

Why we call people “guys”

Did you know that our habit of calling a man a “guy” comes from Guy Fawkes? People called the stuffed dolls “guys”, because they represented Guy Fawkes. Then they called anybody who looked awkward or funny a “guy”, because he looked like those stuffed dolls. After a long time, “guy” started to mean any man, and today people even use “guys” to mean all people: men, women, whatever.

One small project: learn to recite the verse. For a bigger project: make a “guy” and burn him in a bonfire. (But be safe!) What kind of evil would your guy represent?