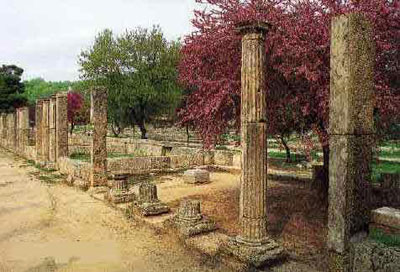 The palaestra at Olympia, Elis, Greece (about 250 BC)

Once all the men had arrived in Elis for the Olympic Games, they spent a month practicing and training together in a big palaestra, or gym, with a sand floor. They only got fresh cheese and water at their meals, and they all ate together. They had to follow strict rules. Judges (also all men) watched the men train, and picked out only the best ones to actually run in the races.

The Olympic Games began with religious sacrifices and choirs singing. City-states from all over sent choirs of young men to sing in the choir competitions. Most of the spectators were men too. Married women were not allowed to watch the Olympic Games, and it is hard to imagine that very many men chose to bring their young daughters.

Each athlete went to the sanctuary of Zeus and sacrificed a pig to Zeus and a black ram to Pelops.

Then it was time for the athletic contests. The tracks were laid out along the north bank of the river Ruphia, behind the temple of Hera and the sanctuary of Zeus that stood there. At the temple of Hera, they had an eternal flame, a fire that was never allowed to go out (kind of like the Olympic torch today).