Herakles and Busiris – Labors of Herakles 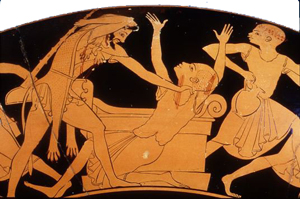 In this story, Herakles traveled to Egypt, where he met the king of Egypt, the Pharaoh Busiris.

Busiris was a bad king. He captured Herakles, because Herakles was a stranger there, and tried to sacrifice Herakles to the Egyptian gods. This was wrong because it went against xenia.

What is xenia?
What is sacrifice?
More about the Egyptian gods

What happened to Busiris?

But just as they were about to sacrifice him, Herakles used his giant muscles to break the chains that were tying him up. Herakles killed Busiris and his sons, and got away.

Why did Greek people tell this story?

Mostly the point of this Greek story is just to suggest the racist idea that Egyptians are bad and weak – they mistreat strangers, and they have weird ideas about their gods, plus they’re losers.

Samson and Delilah
Moses and Pharaoh

Bibliography and further reading about Hercules: