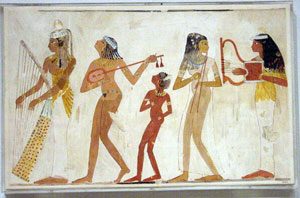 People in Egypt, like other people in Africa, have probably been playing music since the early Stone Age, long before there is any definite evidence of it. The earliest definite evidence of music from Egypt comes from about 3100 BC, at the beginning of the Old Kingdom.

Because there wasn’t any way of recording music or writing down notes in ancient Egypt, nobody knows what Egyptian music sounded like. From pictures, we do know what kind of instruments the Egyptians had. As you can see in this picture, there were stringed instruments like guitars and harps. You had to pluck them: there weren’t any bows.

History of musical instruments
What is bronze?

As the picture shows, a lot of Egyptian musicians were women (though not all of them). Music was a good opportunity for women to work at a skilled job. But just as women in the music industry do today, sometimes Egyptian women musicians had to wear thin or revealing clothes, and dance as well as singing. And many musicians were probably enslaved.

Musicians often performed at religious festivals. They also played at private parties. Probably workers in factories and fields often sang and clapped as they worked, to help keep up a rhythm.

Learn by doing: Play a recorder or a drum
More about African music
More about ancient Egypt