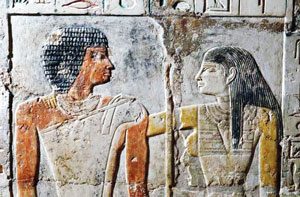 By the time the New Kingdom started, about 1500 BC, many Egyptian writers were writing poetry. Skilled poets wrote these poems, which were translated and passed around not only in Egypt but also in India, Southeast Asia, and Mesopotamia. A similar set of poems have come down to us as the Bible’s Song of Songs.

Many of the Egyptian poems are about love, even though the lovers call each other “brother” and “sister”, and pretend it’s just about their families. In each collection of poems, first the boy writes to the girl, then the girl writes to the boy (Egyptian love poems are always between girls and boys).

But we shouldn’t assume that these poems are really only about love. They may also be metaphors for other power struggles: the Egyptian army conquering Libya, or rich people oppressing the poor.

This is a poem from the boy’s point of view:

Seven days since I saw my sister (girlfriend),
And it’s like I’m sick all over;
My arms and legs feel so heavy,
My body feels like a stranger’s body.
When the doctors come to me,
My heart rejects their medicine;
The magicians are no use either,
Nobody can figure out what’s wrong.
If someone said, “Here she is!” I’d feel better!
Her name would get me out of bed;
Her messenger, coming and going,
That would do my heart good!
My sister’s better than any prescription,
She does more for me than any medicine;
When she comes over, she’s like a charm,
Just seeing her makes me feel better!
When she looks at me I feel young,
When she speaks I feel strong;
Hugging her fixes my flu —
But it’s seven days since she left me!

When did Egyptians stop writing poems?

With the end of the New Kingdom, about 1100 BC, people in Egypt were poorer, and they didn’t have so much time to write poetry, or to copy out poems in school so copies of them would survive for us to read. So we don’t have so many of these poems from the Third Intermediate Period.