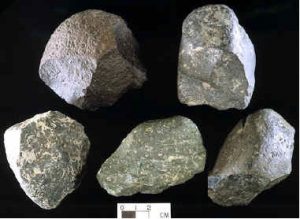 Chimpanzees use stones to hammer on nuts and break them open, and they collect stones to throw at enemies. About 3.3 million years ago, long before modern people evolved with their big brains, and before people began to use fire, early people began to do something different: they began to shape the stones to make them more useful as tools. So people have probably been making stone tools and weapons since before modern humans first evolved, around two million years ago.

Stone-knappers made these earliest chopper tools by hitting one stone against another, usually basalt but sometimes chert or flint. People used the choppers as levers to cut meat off the bone, to crush bones to eat the marrow, and to cut wood and bone for other kinds of tools. People also used choppers to cut plants open to get at the soft parts inside.

Later on, about 1.5 million years ago, early people began to make more complicated stone tools. Archaeologists call these Acheulean tools. Flint-knappers – people who knew how to knapp, or knock chips off pieces of stone – shaped Acheulean tools more carefully, so that they had long straight cutting edges, like a knife. People made these tools out of flint or obsidian. While people were still using these tools, about a million years ago, they invented cooking fires.

About 200,000 years ago, maybe about the time that early people evolved into modern humans, people also started to make new, better stone tools (but other early people like Neanderthals also made these same tools). We call these new tools Mousterian tools. To make Mousterian tools, you have to first shape the stone into a core, and then strike off the knife blades, so making them takes two steps. The advantage is that Mousterian tools use less stone to make, and each tool can be re-sharpened so it will last longer. 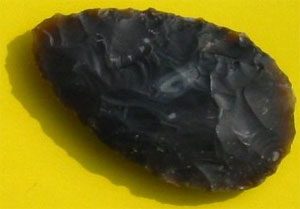 African flint-knappers continued to make Mousterian stone tools until about 90,000 BC. Then some of them began to make stone tools using the “prepared core” method, which was harder than the earlier Acheulean technique. The prepared core method gave the flint-knapper more control, so he or she could produce more consistent, symmetrical flakes. These became the first spear-points, hafted on to wooden shafts. Hunters probably used these spears to hunt large animals like gazelles. These were the tools that the first people to leave Africa took with them.

Around 50,000 BC, African stone-workers made another leap forward and started making much more complex stone tools. We call this the Upper Paleolithic period. People started to make many different kinds of stone tools, specialized for specific purposes. They made knives, spear points, arrow heads, scrapers, drills and augers, and made tiny stone tools (microliths) as the cutting edge of larger tools like bone harpoons and saws. The ability to make these new types of tools quickly spread to Europe and Asia, too.