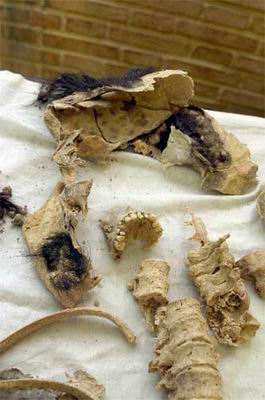 Skeleton of a salt miner from Sassanid Iran

Who worked in ancient mines?

Mining was a dangerous job. So most people in the ancient world didn’t want to do it. This is the skeleton of a young salt miner. Very likely the miner was enslaved, so he didn’t have any choice about working in the salt mine. He died inside the mine, and nobody bothered to take his body out of the mine and bury it. Then the salt in the mine preserved his body. That’s how archaeologists found it.

Slavery in ancient West Asia
Why did people mine salt?
What’s the Sassanian Empire?
All our West Asia articles

This poor miner lived about 500 AD, in the Sassanian Empire (modern Iran). He was wearing a quilted tunic down to his knees, and gaiters (laced-up stockings) up to his thighs. In his hands, he carried oil lanterns so he could see in the dark tunnels. He also had a dagger in a leather sheath. He wore earrings in both ears.