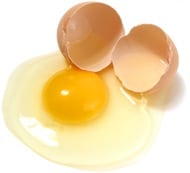 Cracked egg: see the yolk and the white?

For a lot of more advanced cooking, you need to be able to separate eggs. You separate eggs by separating the yellow yolk part from the transparent “white” part. (The white is the part that would turn white if you cooked the egg). You need to separate eggs so you can beat the egg whites. Then you can make souffles or chocolate mousse or many other good things. It doesn’t matter so much if there’s some egg white in the yolks, but if there’s more than the tiniest smidge of yolk in your egg whites, they won’t beat up into stiff peaks.

It’s not easy to separate eggs; it takes practice. The best thing is to practice when you’re making something where the eggs don’t really have to be separated, like scrambled eggs.

There are several different ways to separate eggs. One way is to crack the egg into your hand and let the white (the transparent part) dribble through your fingers into a bowl. Then put the yellow yolk in another bowl. This is pretty easy but it gets your fingers sticky.

Until you’re very good at separating eggs, you should do them one egg at a time, and only put the eggs together after they are successfully separated. That way if you mess one up, you haven’t messed all of them up. If you do mess one up, you can sometimes scoop out a little yolk with a teaspoon or with the eggshell. But if it’s more than just a tiny bit of yolk, it’s better to throw away the egg and start over with another one.

Bibliography and further reading about eggs:

More about eggs
And more about chickens
More about Indian food
Quatr.us home