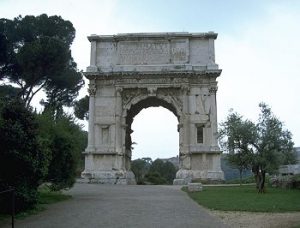 Who built the Arch of Titus?

The Roman emperor Domitian built the Arch of Titus at one end of the Roman Forum in the 80s AD. Domitian wanted to remind people about his older brother, the Emperor Titus. Titus was already dead when the arch was built.

The Flavian emperors
The Roman forum
All our Ancient Rome articles

Why did Domitian build the arch?

Domitian wanted people to remember how Titus had defeated the Jews in Israel. The Jews didn’t want to be part of the Roman Empire. They wanted to be independent. They were leading the First Jewish Revolt to try to get free. But Titus defeated them.

Domitian wanted everyone to know that there was no point in having revolts against Rome. The Arch of Titus let people know that Rome would win and you would be sorry. It was better to just be part of the Empire and not fight it. That was part of how Romans kept the peace. 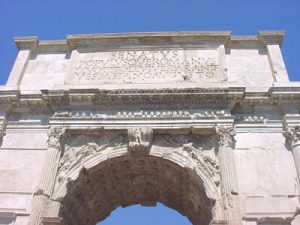 Why is it called the Arch of Titus?

Even though Titus was already dead, Domitian put Titus’ name on the inscription. (It says, the Senate and the People of Rome, to the Divine Titus, son of the Divine Vespasian, Vespasian Augustus).

What is an arch?

The letters were originally picked out in shining bronze letters, but the bronze has been stolen away and melted down. The arch is part marble and part travertine.

What is travertine?
More about bronze

The carvings on the Arch of Titus

The inside of the arch has relief (raised) carvings showing the victory parade when Titus got back to Rome.

You can see the Roman soldiers carrying a huge menorah (candlestick) which they had taken from the Jews. They are about to go under a triumphal arch.

The actual Arch of Titus hadn’t been built yet. So the one in the carving is probably a temporary wooden arch. Titus would have put up that arch just for the victory parade.

Riding in a victory parade

On the other side of the Arch of Titus, the Emperor Titus (whose head is missing now) rides in a chariot drawn by four horses. 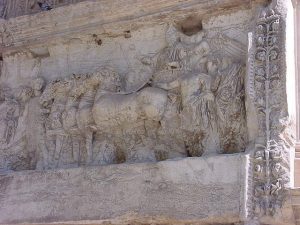 Arch of Titus: The Roman emperor Titus rides in a chariot drawn by horses.

Why are there holes everywhere?

Some holes were made by people in the Middle Ages digging out the lead clamps which once held the travertine blocks together. They wanted to melt down the lead to make new things.

Other holes were made by people attaching wooden buildings to the arch. In the Middle Ages, hardly anyone lived in this part of Rome. People used the ruins to make houses, market stalls, and animal shelters. Later on, the government removed those wooden buildings to show off the arch, and to preserve it.

Learn by doing: make an arch
Arch of Septimius Severus
Arch of Constantine

Bibliography and further reading about the Arch of Titus: