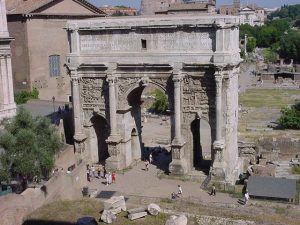 Arch of Septimius Severus. You can see the Roman Senate in the background.

Septimius Severus was a Roman emperor about 200 AD who decided to put up a stone triumphal arch in the Roman forum in order to remind people about his military victories over the Parthians east of Rome. In this picture, you can see the Roman Senate House in the background on the left. 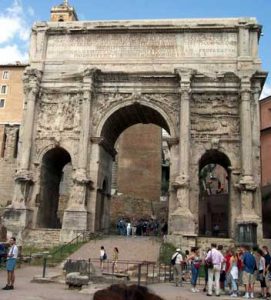 Arch of Septimius Severus, in the Roman Forum near the Senate House 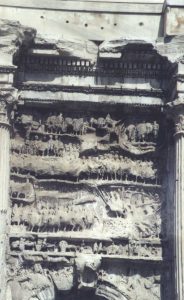 Victories over the Parthians on the Arch of Septimius Severus

The reliefs on the arch of Septimius Severus show victories over the Parthians. The men who carved this arch, unlike those who carved the Arch of Titus, used stone drills to cut away the stone, creating areas of high contrast darkness and light.

Over the carvings there was an inscription with gleaming bronze letters, but the bronze has been stolen away, and only the nail holes and grooves for the letters are still there. That’s enough for us to read the inscription. 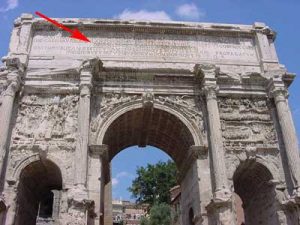 Inscription the Arch of Septimius Severus

We can see where Septimius Severus’ son Caracalla, when he became emperor and killed his brother Geta, had his brother’s name scratched out of the inscription. Can you see it on the third line from the bottom? The red arrow points to it.

Bibliography and further reading about the Arch of Septimius Severus:

The Arch of Septimius Severus in the Roman Forum, by R. Brilliant (1987). Unfortunately out of print, but libraries should still be able to get it.