Who was Velazquez? Spanish art history 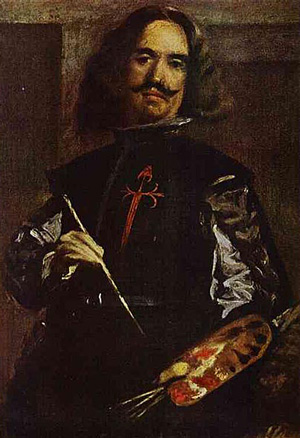 Velazquez (self-portrait), ca. 1650 AD, when he was about fifty years old.

Diego Velazquez was one of the best artists of the generation after Rubens. He was born in 1599, in Seville, in southern Spain. He may have been descended from Spanish Jews who had been forced to convert to Catholicism a hundred years earlier.

Young Diego’s parents sent him to school, hoping he would be a lawyer or a professor, but when he turned out to be good at art they apprenticed him to an artist when he was eleven years old. A year later, Diego left that artist for another, and stayed there until he was 17.

When he grew up, Velazquez married his boss’s daughter, and they had two daughters, though one died when she was still a baby. Velazquez began to have a good painting business in Seville, but he wanted more. When he was 23 he went to Madrid. By the end of the year he was the official portrait painter for King Philip IV, with a regular salary. 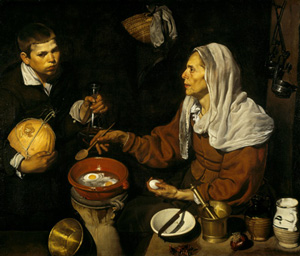 Velazquez spent the rest of his life in Madrid, painting a lot of portraits but also religious scenes and scenes from daily life. He painted Charles I of England when he visited Spain, and he showed Rubens around when Rubens visited – they went and looked at the Titians together in the palace. Rubens liked Velazquez’s work, but Velazquez didn’t imitate him. Velazquez painted many sympathetic portraits of physically challenged people at court, and of people of color. He inherited at least one enslaved servant himself – Juan de Pareja – but later freed him. 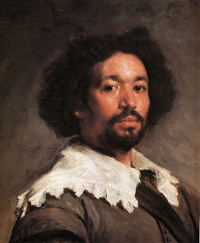 Juan de Pareja, when he was enslaved by Velazquez

When Velazquez was thirty years old, Philip IV paid for him to travel to Italy to see the paintings there. He went twice, and maybe as a result his style became more abstract as he tried to do more with fewer brushstrokes. He spent the rest of his life in a successful career at the Spanish court, and became a fairly rich man. Velazquez and his wife both died of a fever in 1660, when he was 61 years old.

Learn by doing: paint or draw a portrait of somebody
More about Early Modern Spain