Greek pottery in the stone age 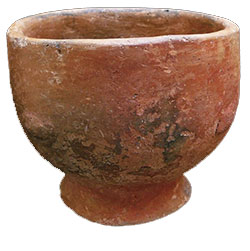 Around the time that people in Greece settled down in houses and villages, and began planting their own crops and herding animals, they also began to produce pottery. They learned how to make pottery from their neighbors in West Asia.  This Neolithic period was around 6000 BC. The first pottery was plain, but very soon people began to decorate it. We call the earliest kind of decorated pottery in Greece Rainbow Ware, because of the way the colors blend into each other, though it is really only black and red.

In the Middle Neolithic, people began producing another kind of pottery with red and white decoration in geometric patterns, which is known as Sesklo ware. Sesklo ware got to be very well known around Greece, so much that other towns began to make cheap knockoffs of it for people who couldn’t afford the real thing. 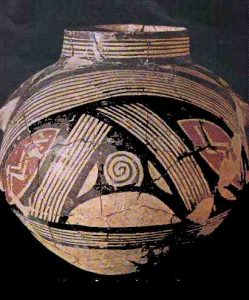 Then in the Late Neolithic, in southern Greece, people painted black patterns on a cream background. But the newcomers, the Dimini people, made a new kind of pottery, black and cream-colored, often in spirals. 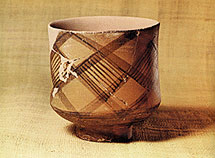 (They may have been influenced by West Asian styles.)

Did you find out what you wanted to know about Stone Age Greek pottery? Let us know in the comments!

Learn by doing: make a pot out of clay
More about Early Bronze Age Greek pottery

The Early Neolithic in Greece : The First Farming Communities in Europe, by Catherine Perlès, Norman Yoffee (Editor) (2001). This is a book for specialists.