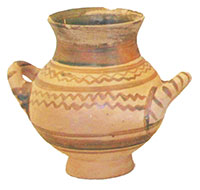 With the collapse of Mycenaean civilization around 1200 BC, Mycenaean pottery also went downhill.

People had other things to worry about than making fancy dishes. Nobody had any gold to buy them with anyway.  And nobody knew how to do it anymore.

A lot of the Dark Age pottery was apparently made by local potters who didn’t know much about it: it is often made by hand instead of on a potter’s wheel, and all lopsided, without any decoration.

What happened to octopus pots?

Even the few pots which are still made sort of in the Mycenaean style are sloppy, and tend to be lopsided. The old octopus and seaweed designs get to be just one or two wavy lines drawn around the belly of the pot. Is that a lack of skill, or an interest in abstraction? 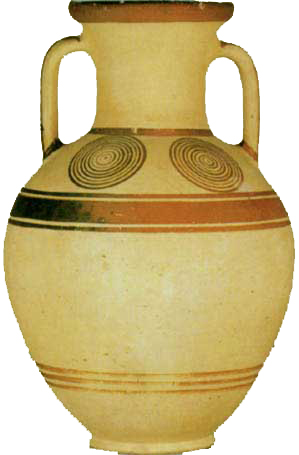 But the Dark Age didn’t last forever. Later on, about 1000 or 900 BC, people began to make better pots again. People who study pots call this new style the Proto-Geometric, because it comes before the Geometric style.

One interesting part of this new style is that the pots have lots of circles on them, one inside the other, like on this pot here.

These circles were popular because somebody had invented a new tool like a compass but with a lot of paintbrushes attached, so you could paint these circles quickly and easily.

Did you find out what you wanted to know about Dark Age Greek pottery? Let us know in the comments!

Learn by doing: make a clay pot by hand
More about Geometric pottery