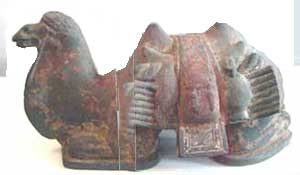 It was in the time of the Three Kingdoms that the first artists appear whose names we still know today. One of the earliest Chinese artists whose name we know is Ku K’ai-chih, who lived in the 300s AD (when Constantine was first building Constantinople in West Asia). 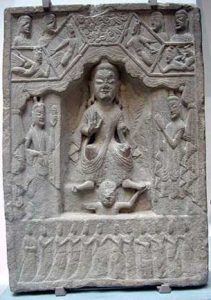 Ku K’ai-chih is said to have been a great portrait artist – he painted pictures of people. But nothing he painted has survived for us to look at today.

Chinese artists kept on being inspired by Buddhist themes. Beginning in the 400s AD, they began to paint the Caves of a Thousand Buddhas near Dunhuang. The earliest paintings in these caves were simple pictures of Buddha and his boddhisatvas. The style of these paintings shows that the Chinese artists had been looking at Indian and Roman paintings, though there are many Chinese elements in the style as well. 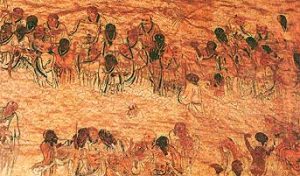 Caves of a Thousand Buddhas near Dunhuang, 400s AD – Buddha and his boddhisatvas 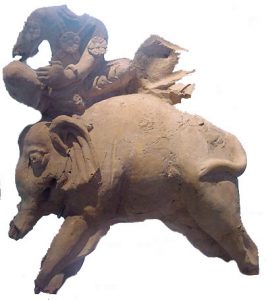 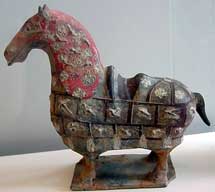 What about Sui Dynasty art?

China: Dawn Of A Golden Age (200-750 AD), by James Watt and Prudence Harper (coming soon – fall 2004). This is the catalogue from an exhibit at the Metropolitan Museum of Art in New York City – it has great pictures and also a detailed discussion of the art of this period.