Well, I’ve been feeling bad about having trashed the Boston Museum of Fine Arts’ Sudan exhibition, so I am very happy to be able to praise the galleries of the Oriental Institute today. I mean, I arrived already feeling cranky – really, do they have to keep calling it the Oriental Institute??! – but the galleries were so lovely that they totally overcame my suspicion and won me over. Plus, very much unlike the Sudan exhibit, the OI galleries are entirely free! If you are in Chicago, you should go!

What was so great about them? Well, the first thing I noticed was that they were sharing space in the gallery with contemporary Syrian and Iraqi artists (Mohamad Hafez and Michael Rakowitz), whose work reminded us that culture continues today in the same places where the material in the galleries came from, and is still just as interesting as the older material was. 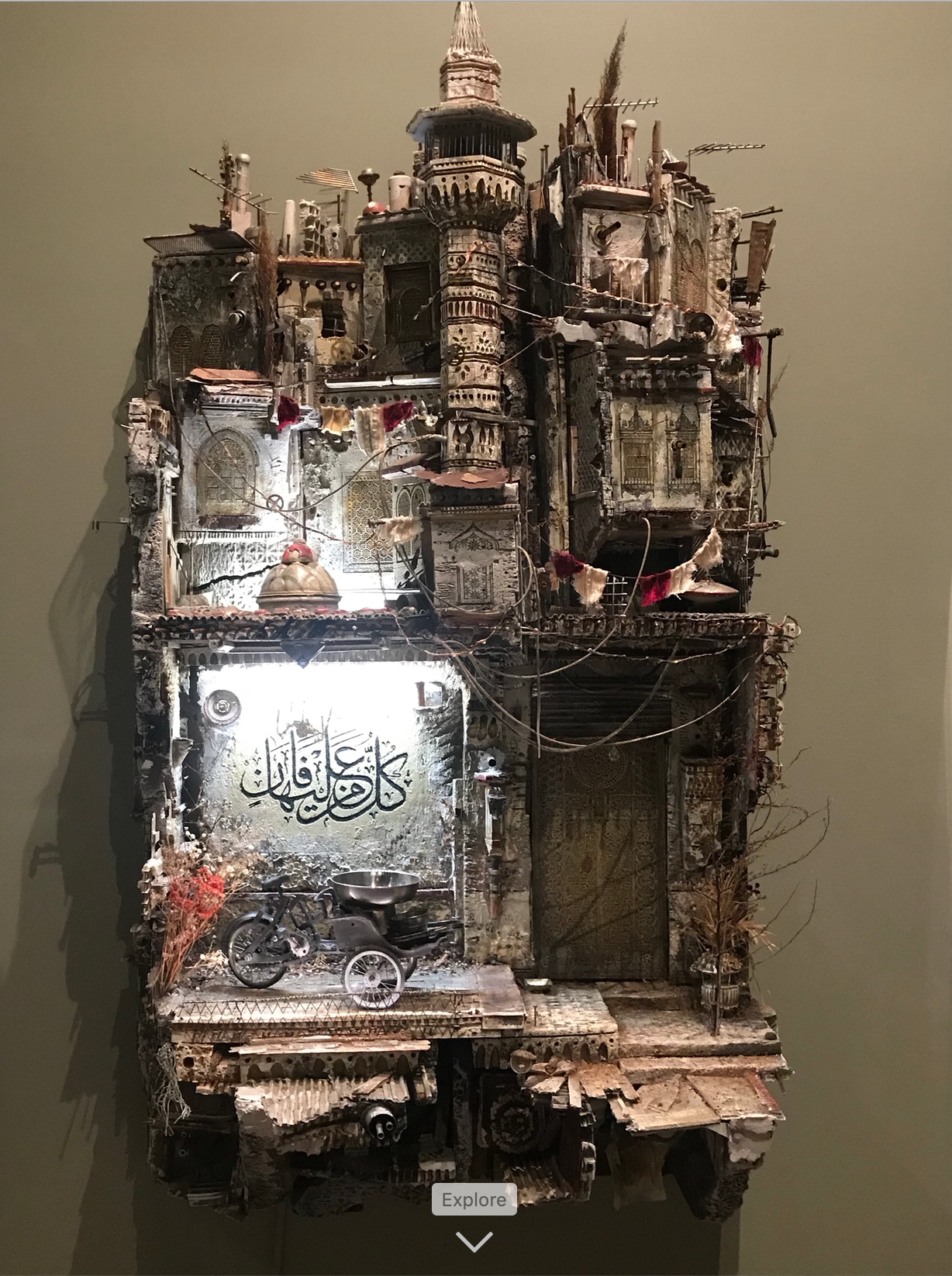 Mohammed Hafez, on display in the Oriental Institute’s galleries

Second, throughout the material was displayed respectfully, in such a way as to give a clear sense of what it was. A door hinge came with a model showing how it was used.

Monumental carvings and reliefs were displayed so as to demonstrate how impressive they had been in their original setting: Assyrian wall carvings were set in narrow corridors, as they had been originally. A Persian bull was displayed high enough to loom over visitors, as it had at Persepolis. I found this lion and bull moving, though I wished for more discussion of its relationship to Zhou Dynasty Chinese representations, and to Hellenistic Greek art. Was this carved by Greek artists?

Assyrians and the Zhou Dynasty
Who were the Persians? 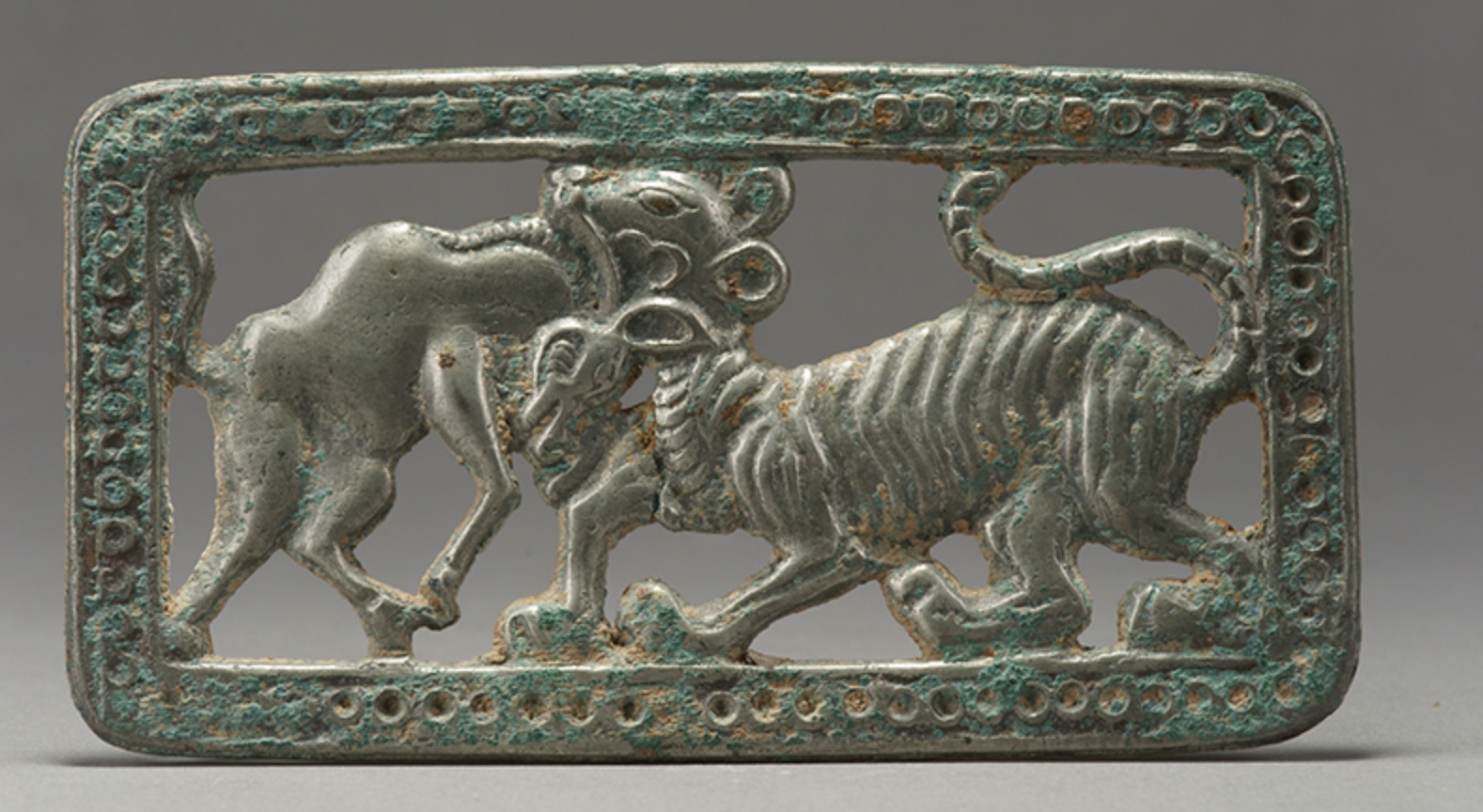 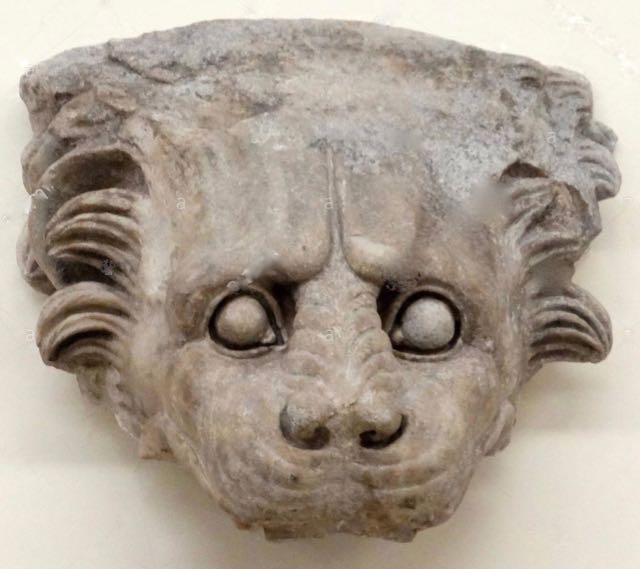 Greek Lion downspout from the Temple of Artemis at Ephesus, 300s BC

At the other end of the spectrum, I love when museums really show how people lived. The OI had plenty of that, too: game pieces and game boards, ear-cleaning tools, keys and locks, cosmetics grinders, children’s toys and dolls, rattles, animal watering troughs, food in baskets, linen cloth, musical instruments, cuneiform rental leases and tax receipts, a clay oven, models of bread-making and sailing from Egypt, and so on. There was a great explanation of the bitumen industry that made it clear that this was an industry and not just individuals digging their own bitumen. The OI also gave a good sense of how important bone was as a material.

What is cuneiform?
West Asian games
History of music

The diversity of West Asia and Africa was honored in many different ways: a respectful discussion of how dwarves were treated and represented in art; the care taken to mention that beads were imported from India, Afghanistan, and elsewhere. (For some reason the origins of the ivory were not mentioned, but perhaps we could have been told that elephants are not native to West Asia, so the ivory was also imported either from India or from South Africa.)

Diversity over time was also demonstrated very effectively with big cases arranged chronologically to show how carvings, cylinder seals, and other objects changed over time.

Beads from Tutub, Iraq (2900-2300 BC), including lapis lazuli from Afghanistan and carnelian from the Indus Valley. (OI)

I would have liked to see more discussion of the role of beads and gold jewelry as, essentially, money, rather than just frivolous decoration. But that’s a discussion that is still going on, and maybe the museum is right not to present it to visitors as settled fact. 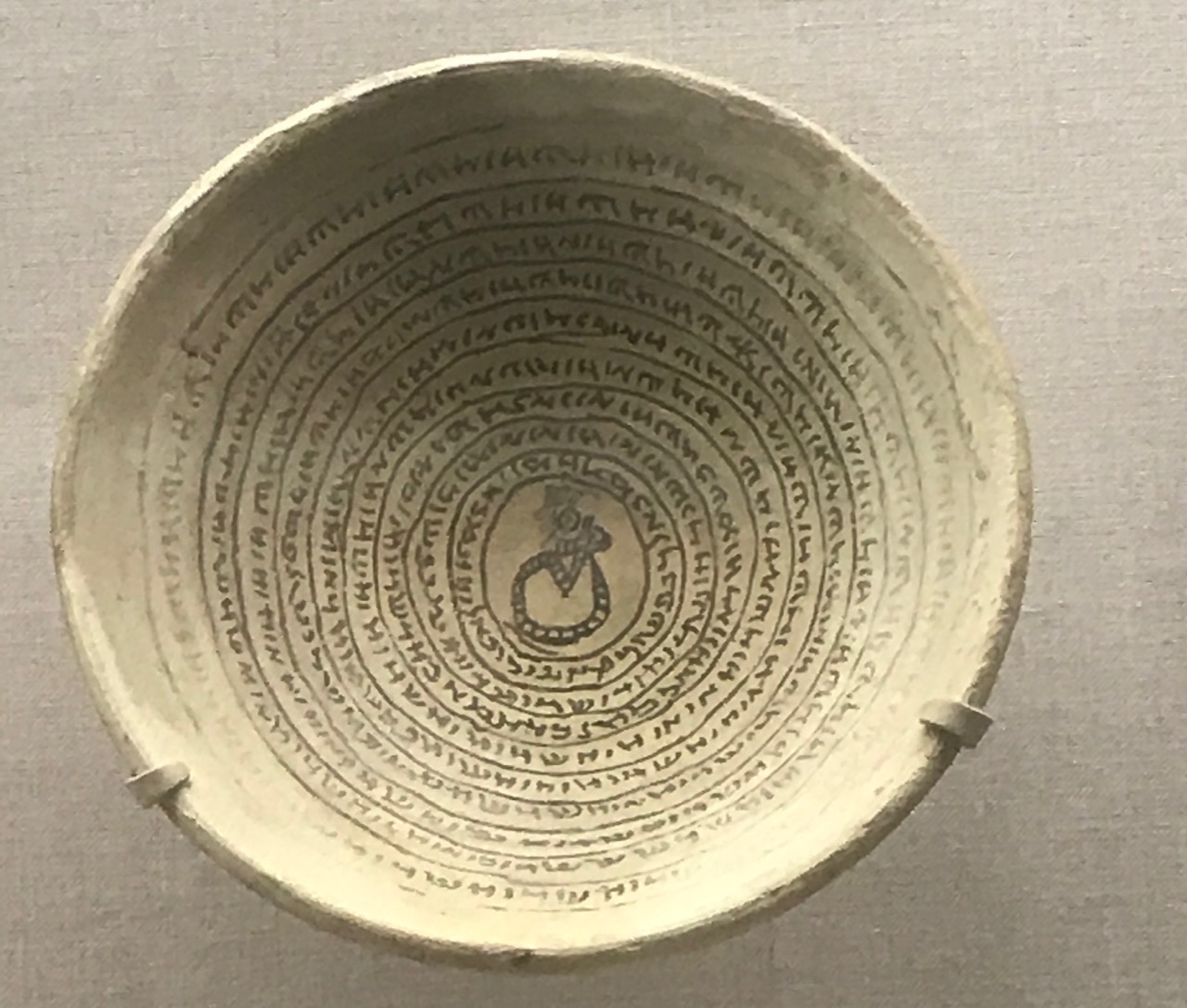 The Sudan gallery near the end provided an especially clear contrast with the Sudan exhibit at the Boston MFA. Here, much more than in Boston, the Sudanese were treated as a culture in their own right, not as an offshoot or dependency of Egypt. The OI labels speak of “shared cultural development,” rather than colonies. Unlike the MFA, the OI mentions how Sudan traded “farther south” as well as north towards Egypt. A discussion of Greek influence on Nubian art was also welcome. The reference to recently discovered “carnelian mines” reminds us that Nubians, too, had developed specialized industries. I loved the elaborate necklace made of ostrich eggshell beads.

Ostrich eggs and Easter eggs
Who are the Nubians? 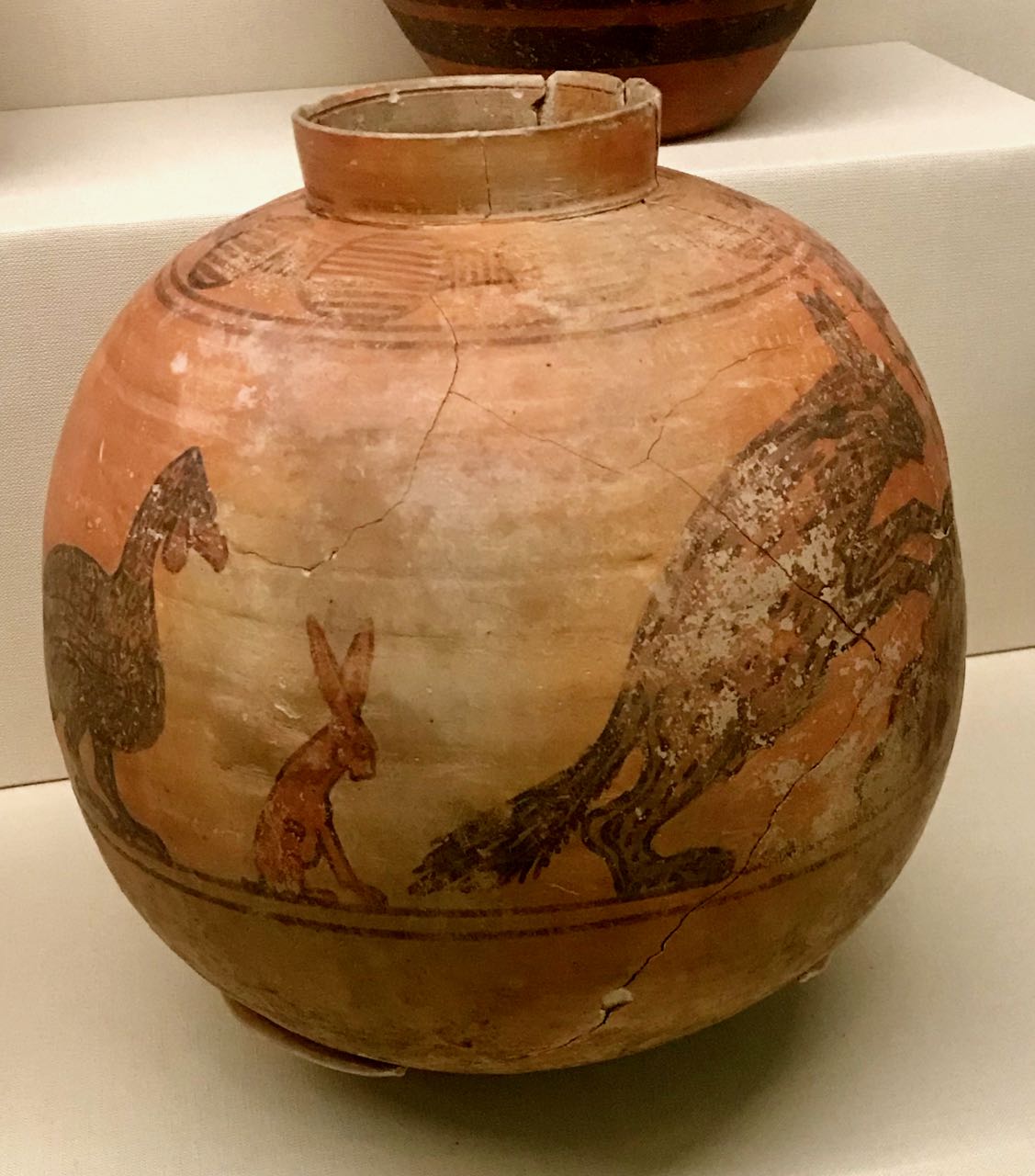 There were also good explanations of how looting destroys the archaeological record, and some honest discussion of the role of the OI itself in appropriating artifacts. The display of excavation reports and photos from the early days of archaeology was appropriate and helped demonstrate transparency. The replica of Nefertiti’s famous bust presented a missed opportunity to discuss forgery as well (some people think the bust is a forgery).

And throughout, they refer to themselves as the OI, which seems reassuringly sort of punk, and allows you to forget the old Oriental Institute. But surely it should be possible to change the name?