A review of the Met’s Sahel exhibit

One of the last things I did before the lockdown was to go to the Metropolitan Museum of Art in New York to see their temporary exhibit, Sahel: Art and Empires on the Shores of the Sahara. And I’m so glad I did get to go before the museum closed! And I took a lot of photos, so if you missed it, I can give you some idea of what you would have seen if you had gone. 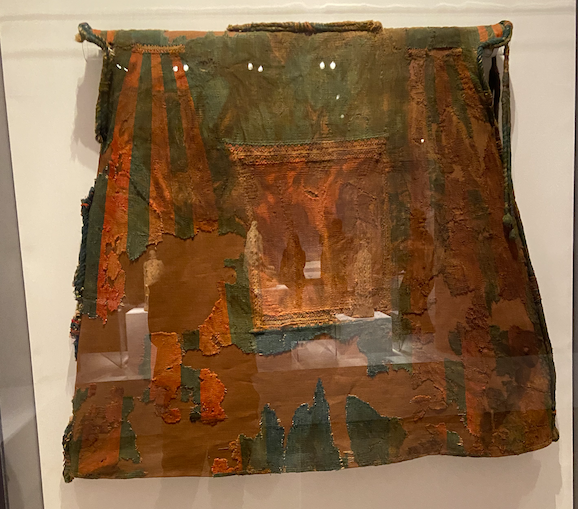 A wool tunic from the 700s AD, excavated in Niger.

First of all, I really liked this exhibit. Throughout the whole thing, the attitude was respectful, the artists’ intentions were considered and explained, and there was relatively little of the tributes to colonialism which so often dominate this sort of exhibit. It was way better than the recent Sudan exhibit at the Boston Museum of Fine Arts, though there were some gorgeous objects there as well.

As the creators of the exhibit intended, the long line of sculptures of people riding horses down the center of the exhibit room pulled the long history of the Sahel together, and showed that West Africa was a continuous culture over several thousand years. Unlike many such exhibits, they didn’t fill in with a lot of recent material, though there was some. Most of this is really from before 1500 AD, and some is from much, much earlier. 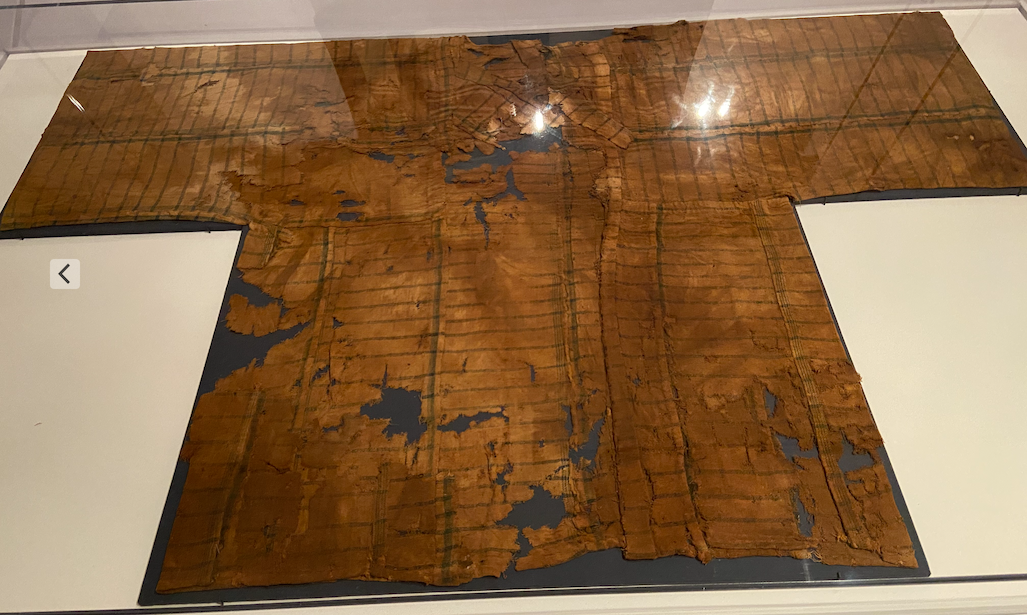 This cotton tunic, dyed with Indian indigo dye, was woven in Mali in the 1500s or 1600s AD

On the other hand, I also really appreciated that the exhibit emphasized change over time. In each bay of the room, you got a clear explanation of the culture being displayed, the time, and how it was different from other places and times. For example, you see that the earlier tunics are made of wool, before cotton becomes more common in the middle ages.

A lively trade in beads also was marked by the presence of local glass and gold beads, and also carnelian beads probably imported from India (along with cotton and the indigo used to dye it).

Carnelian beads, probably imported from India around the 500s AD

A lot of the trade was in gold. This piece shows, as the exhibit says, considerable Islamic influence from Morocco, but I think it also stands up to the best medieval gold work from Europe. Really, you would probably have believed me if I said this was from anywhere in western Afro-Eurasia. Senegal is as much part of that culture as Britain or Romania. 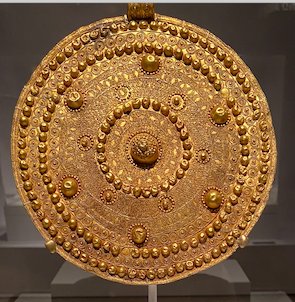 Similarly, I’m looking at this warrior figure from Mali, from the 1100s AD, and comparing it to figures from the monastery at Moissac, which were also carved in the 1100s:

Or to this wooden crucifixion from the south of France, also from the 1100s. (It would be great to see an exhibit putting contemporary objects from West Africa, Islamic North Africa, and Europe side by side.) 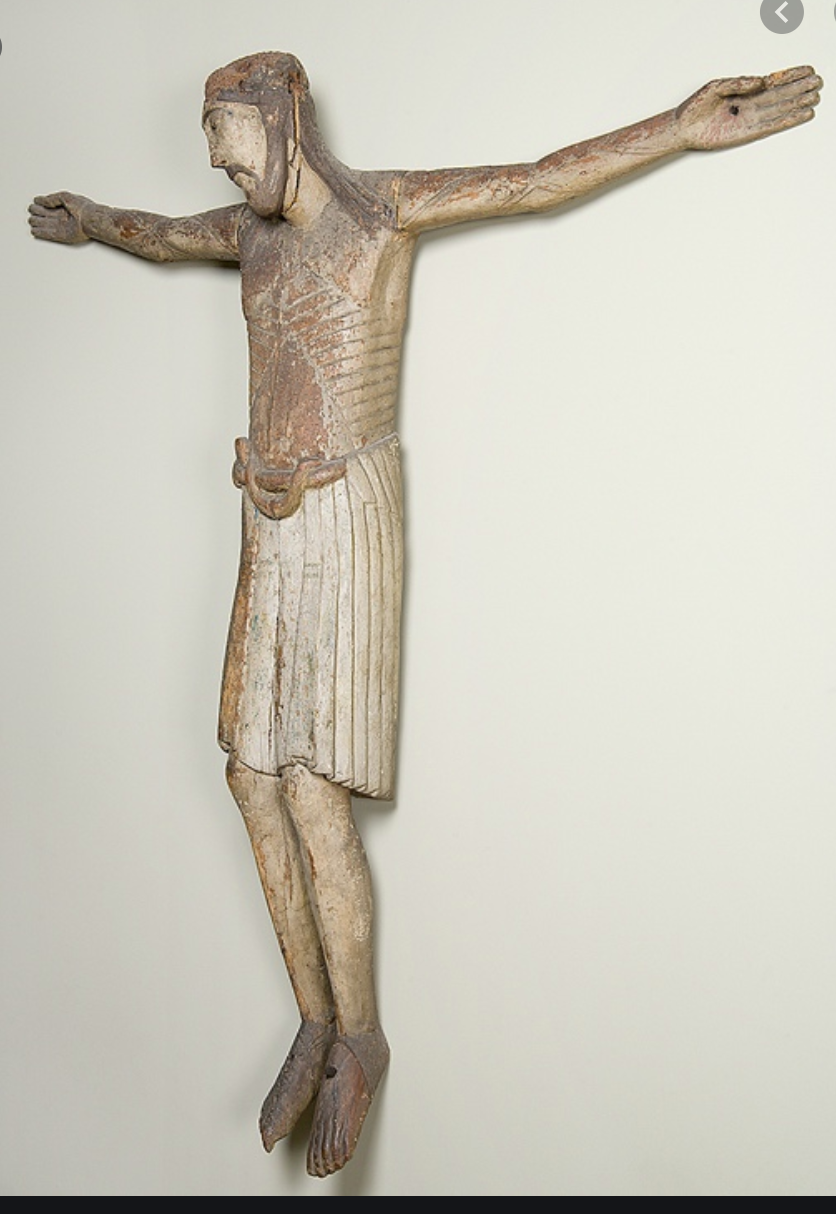 (That’s extra interesting to me because the sculptures at Moissac also remind me of Gandharan sculptures from northern India, from what is now Pakistan, which was trading with West Africa at this time (that’s where the indigo dye and cotton came from), and where there were also statues a lot like this African one: 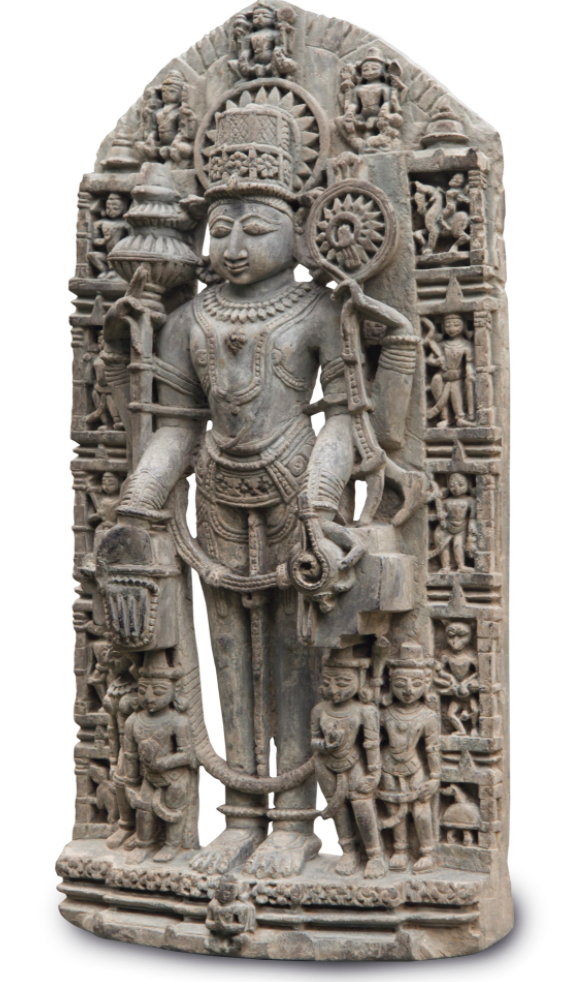 A stone carving of the Hindu god Vishnu, from about the 1100s AD in Gujarat or Rajasthan, in NW India (now in a private collection)

Here’s a second India comparison: this reclining figure, from Jenne-Jeno in Mali, from the 1100s-1300s: 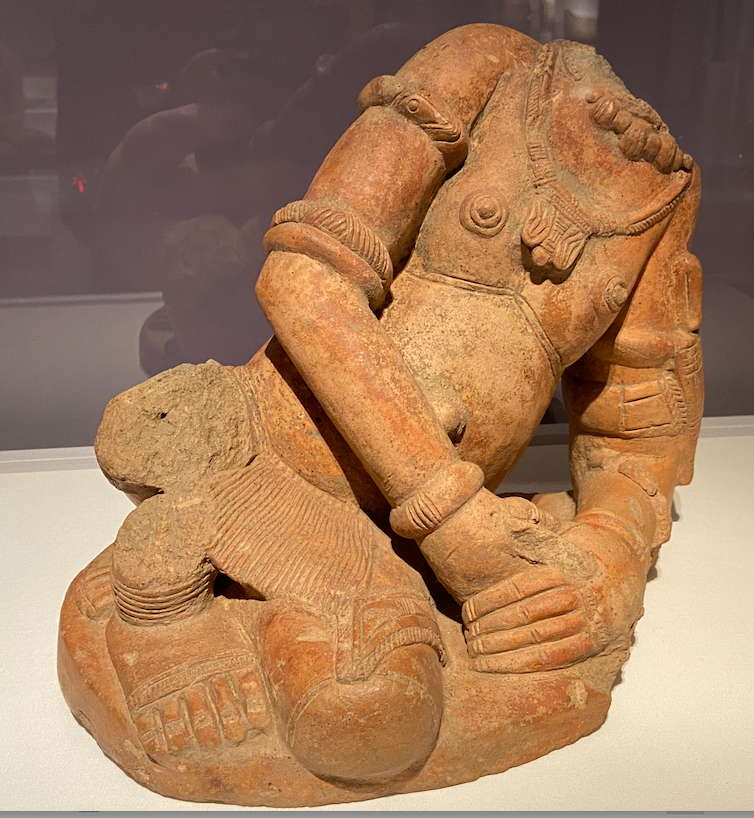 Compare the African figure to this Indian dancer from the Chennakeshava temple in Karnataka in south-west India, built in the 1100s AD. Maybe something we could do while we’re in quarantine is put together our dream exhibits, pairing these sorts of objects!

I was super excited to see the many textiles on exhibit. You often think of people from the past as wearing drab or at least simple outfits, but these involved bright colors and complicated patterns. 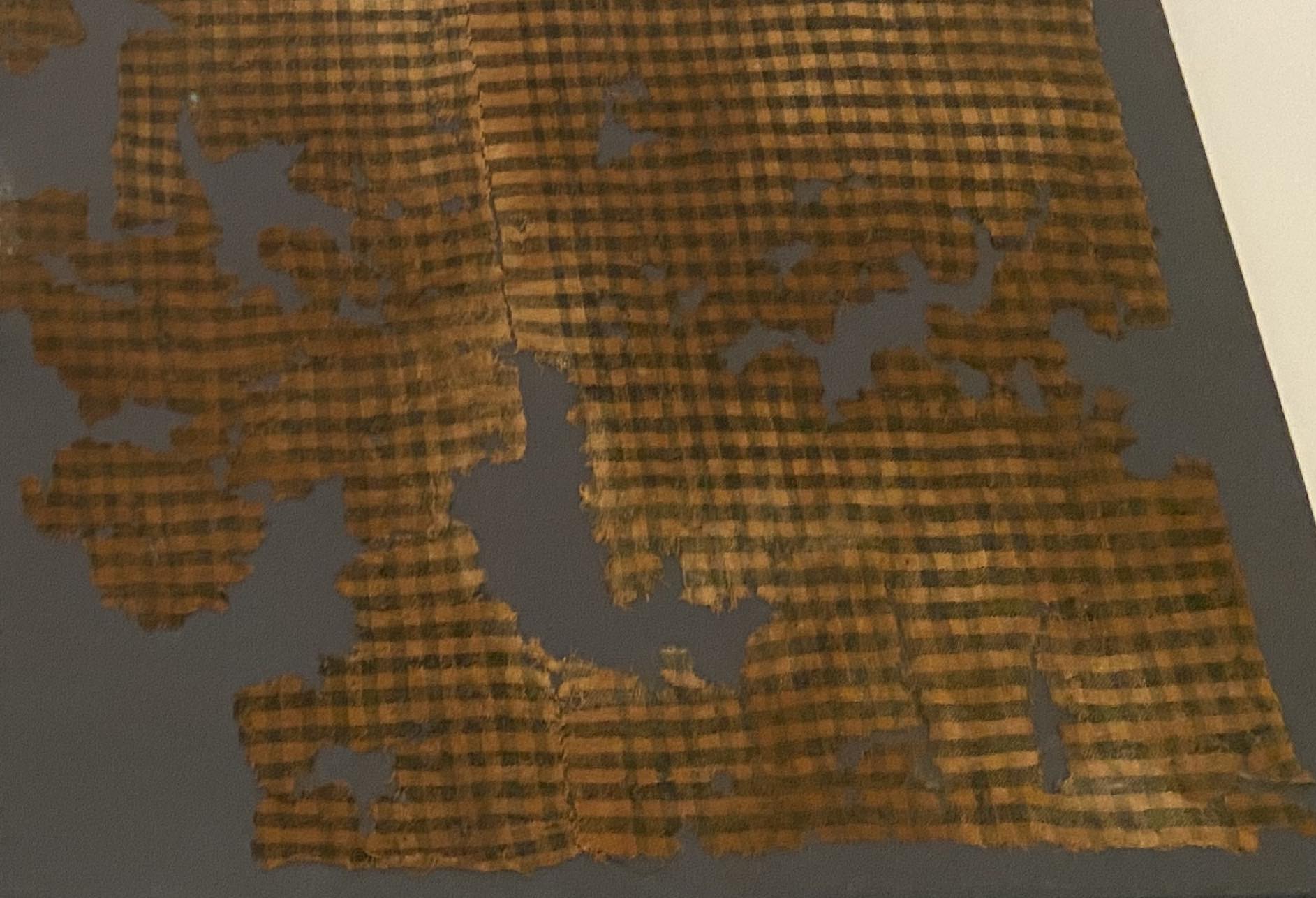 Blue and white checkered cotton cloth from medieval Mali, locally made and dyed, I think, with Indian indigo

My only sad was that I thought with the name “Sahel” that we would also get material from further east in what is now Chad and Sudan, but this exhibit really focused on West Africa. And at the time, I thought the exhibit might have done more to encourage us to go to West Africa and see the objects in their countries of origin, and to talk about returning art to where it came from, but now it seems like when will any of us get to West Africa? and I’m so grateful to the West African countries for having allowed their objects to travel to me in NYC so I could see them!

Also check out the Met’s page about this exhibit (with a video with a great music soundtrack).

And here’s the New York Times article about the same exhibit.