Battle of Salamis – a good idea?

The Greeks fought the Persian navy at the Battle of Salamis on this day, in 480 BC, almost 2500 years ago (that will be next year!). We tend to remember this battle as a triumph for independence, just like the American Revolutionary War against the British Empire. And they are the same in some ways. Certainly the Persians had a big and powerful empire, and the Greeks were fighting for their independence.

But we should not automatically identify with the Greeks, or think they must have made the right decision. What if the Athenians had agreed to become part of the Persian Empire, as lots of their neighbors had (including Macedon and Thebes)? 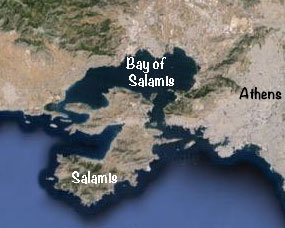 Satellite view of the bay of Salamis

Probably things would not have been very different without the Battle of Salamis: the Athenians’ major trade partners in West Asia and Egypt were already part of the Persian Empire anyway. And the Persians would have left the Athenians to run their city more or less as they pleased. A hundred and fifty years later, Alexander would have united them all in one empire anyway.

The great oracle at Delphi advised the Athenians to surrender to the Persians. The Athenians refused, and asked for a different oracle.

The Delphic oracle
The Peloponnesian War

But maybe the oracle was right the first time – the Athenians were invited to become part of a large community, where they would have benefited from trade protections and military protections, and the Peloponnesian War might have been avoided. So is it mainly racism that encourages us to celebrate the freedom of the Greeks (who we imagine as white)  from the Persians (who we imagine as darker-skinned)?