Anansi’s Free Dinner (more about Anansi and the Turtle) 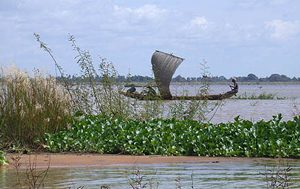 Anansi and the Turtle, continued

Well, as time went by, Anansi the spider began to think more and more about how Turtle had promised to feed him a free dinner. Anansi was still feeling greedy, and he wanted to get his free dinner. So one day he walked over to Turtle’s house.

Anansi got to Turtle’s house just about dinnertime, as the sun was going down over the river. Turtle was lying on a rock in the sun, warming himself up, as turtles do. When Turtle saw Anansi, he said, “Hello there, Anansi! Have you come to have dinner with me?” And Anansi said, “Yes, that would be very nice, thank you.” He was getting hungrier and hungrier. 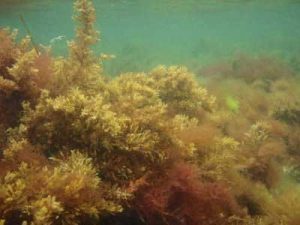 Seaweed in the ocean

Anansi tries to dive down

So Turtle dove down to the bottom of the river to set the table for dinner and get everything ready. Anansi waited on the rocks by the shore. Pretty soon Turtle swam back up and said, “Oh Anansi! It is all ready now. Please join me for dinner.” And Turtle dove down again and began to eat the green leaves he had for dinner. Anansi tried to dive down to the bottom of the river, but he was a spider, not a turtle, and he couldn’t dive that deep. He kept floating back up to the surface again. He tried jumping in, he tried diving in, but nothing helped. Oh! He just couldn’t get down to that dinner.

Finally Anansi had an idea. He put lots of stones in the pockets of his coat, and finally he was heavy enough to sink down to the bottom of the river. How clever he was! Now he saw Turtle’s table, full of juicy green leaves and lots of other delicious food. Anansi’s mouth was watering.

Turtle gets his revenge

But just as Anansi was reaching for some of that delicious food, Turtle stopped him. Turtle said, “Anansi, surely you’re not going to eat dinner with your coat on? That’s not how we do things at my house.” Anansi, without thinking, said, “Oh, of course you’re right, Turtle! What was I thinking?” and he took his coat off. But without the rocks in his pockets to hold him down, Anansi floated right back to the surface of the river again, and popped right out of the water. Anansi sadly put his head down into the water and watched Turtle eat up all of the delicious food.

You might want to compare this Anansi story to the African-American story of how Br’er Rabbit lost his tail, or to the Roman story of Baucis and Philemon.