Long, long ago, according to this West African story, the sky god Nyame kept all the stories locked up in a wooden box, up high in the sky, and the people down on earth had no stories to tell. Lots of people and animals had tried to get the stories from the Nyame, but nobody could do it. Everyone was sad with no stories. 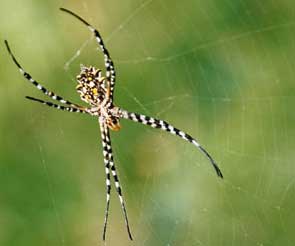 Anansi asks his god for the stories

Finally the wise old spider, Anansi, spun a long thread of his web all the way up to heaven and he climbed up his sticky thread and he got to heaven. He asked his father Nyame, “Can I have the stories, please?”

But Nyame laughed at Anansi and said, “Oh, these are very expensive stories. You wouldn’t be able to pay for them, little spider.” Anansi wasn’t scared. He said, “How much do these stories cost, then?”

But the stories are very expensive

Nyame said, “They’re very, very expensive.” (This was in the days before money was invented). “You’ll have to bring me four rare and fierce animals: a snake that swallows people whole, a leopard with its sharp teeth like spears, a hornet that stings people, and Mmoatia, an invisible fairy. Bring me all four of them, and I’ll give you the stories.” Nyame laughed again, because he knew that would be too hard for Anansi, and he wanted to keep all the stories up in the sky just for himself.

Anansi’s wife Aso has a plan

Anansi climbed slowly back down his sticky thread to the earth. How would he get all those creatures for Nyame? When he got home, he told the whole story to his wife, Aso, and Aso told him how to capture the snake. She said, “Take a good long thick branch and some strong vines to the stream where the snake lives….” and she told him the rest of her plan.

So Anansi did that, and he tied the snake to the stick with his vine to keep him straight, and when he was all tied up – Anansi took the snake up to heaven and turned him over to Nyame. That was the first thing done. But Nyame just said, “Where’s the other three?”

How Anansi tricked the leopard