How Anansi brought sickness into the world 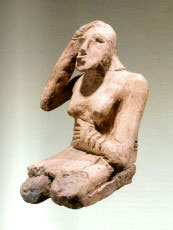 So this is a story about how Anansi happened to bring sickness into the world. So one day Anansi went to the sky god Nyame and asked him for a sheep. Anansi said, “Give me your sheep, and I’ll kill it and eat it and bring you a beautiful girl in exchange.” So Nyame gave Anansi the sheep and Anansi killed the sheep and ate it.

But he cheats on his deal

Then Anansi went to a village that had no men and married all the women who lived there. He was having a pretty good time! But someone told Nyame about it, and Nyame sent messengers to bring all those women to Nyame instead. They only left one woman, who was sick.

Anansi was angry. He said to the woman, “What good are you, sick like that? You can’t do anything.” But the sick woman told Anansi to give her a bath and pour the bath water into a gourd. After he did that she became very beautiful. Again someone told Nyame, and again Nyame sent messengers to bring this woman to him too.

Get your own gourd drum!

Anansi spreads her sickness to the world

Anansi was even more angry. He took the gourd with all the sickness-water in it and stretched a skin over it to make a drum. He beat out songs on the drum, and soon someone told Nyame that Anansi was keeping all the good songs for himself. Nyame sent messengers for the drum, but Anansi said he had to bring the drum himself.

So Anansi brought the drum to Nyame, and he played the drum for Nyame and all the women, but when they were all dancing Anansi tore the skin off the gourd and spilled the sickness-water all over them all – and that is how sickness came into the world.

(Compare this story to the Greek story of Pandora.)