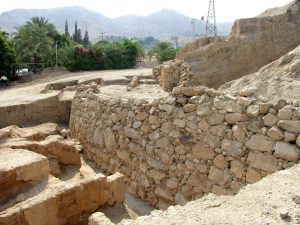 Here’s another Bible story, telling what happened after Moses led the Jews out of Egypt. In this story, the Jews finally arrived back in Israel and Canaan, around 1200 BC.

But they found that there were people living all over it! These people were the Canaanites (KAY-nan-eye-ts). So the Canaanites said, “Hey, there was nobody living here when we got here, what do you mean this is your land? God told you to live here? He’s not MY God, so what do I care?” (This is how the Bible tells the story; click here for another version.) 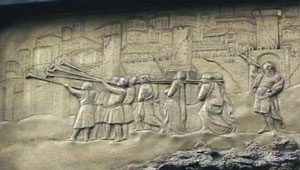 Joshua’s troops blowing their trumpets outside the walls of Jericho (from the doors of the Baptistery in Florence, 1400s AD)

Joshua and the Battle of Jericho

Well, the Jews believed God did want them to live in Israel. So they began fighting the Canaanites for the land. By this time Moses was dead, and, according to the Bible, the main leader of the Jews was Joshua. Joshua was a good general. The Jews won many battles against the Canaanites, including a famous battle at the city of Jericho.

According to the battle, God told Joshua to carry the Ark around the great stone walls of Jericho and blow trumpets. That would knock down the walls to let the Jews in. (There’s a song about it that goes “Joshua fought the battle of Jericho and the walls came a-tumbling down.”).

After the battle: a massacre

When Joshua finally captured the city of Jericho, he had every single person in the city killed with swords, even children and old people, and even the cows and donkeys and sheep (Joshua 6:20-21). According to the Bible, that’s what God wanted Joshua to do. Soon the Jews had gotten enough of the Canaanites and other people out of Israel (or killed them) and they settled down there to live in peace. (This is probably not what really happened though. The battle of Jericho is only a story, not historical fact.)

Where do donkeys come from?
How about cows?

Over the next hundred years or so, after the death of Joshua, the Canaanites and the Jews kept on fighting, off and on. The Bible tells the stories of these fights in the stories of the women Deborah and Jael, and the man Gideon.

Learn by doing: compare Jericho to the Trojan Horse or the Athenians on Melos
King David and King Solomon
More about the Jews