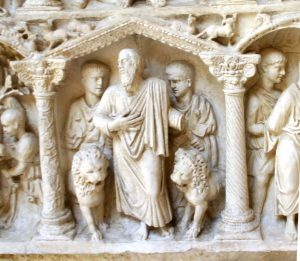 Daniel in the lion’s den, from the sarcophagus of Junius Bassus, 359 AD in Rome

In the Bible story, Daniel was one of the Jews who was in captivity in Babylon during the reign of the Neo-Babylonian kings, in the 600s BC.

How did Daniel get to know the king?

Like the earlier Joseph (and many other characters in stories), Daniel was able to interpret people’s dreams to tell the future. Because God let him interpret dreams, Daniel became a big favorite of King Nebuchadnezzar.

Joseph and the Pharaoh

The writing on the wall

A little later on, Babylon was being ruled by the last Babylonian king Belshazzar. Belshazzar was drinking wine with his lords one night when a disembodied human hand appeared and wrote mysterious letters on the wall of his palace. They said

Daniel interpreted the letters for Belshazzar. He told Belshazzar that these letters meant that the Babylonian Empire would fall. Sure enough, that very night (according to the story) the Persians did take over Babylon.

A lion being released from a cage from a carving on the wall of an Assyrian palace. (See the man on top who is releasing the lion?)

The new Persian king, Darius, made Daniel one of his main helpers. (Though really the first Persian king was Cyrus, not Darius – the story has it wrong.)

But other people were jealous and got Darius to make a law that no one could worship any god but Darius himself. Daniel continued to worship his own God, following the Commandments. Daniel stood up for his freedom against the king’s abuse of his power. So these jealous people forced Darius to throw Daniel into a pit with lions.

What happened to Daniel?

But (says the Bible), because God protected Daniel, the lions refused to eat Daniel, and he came out of the pit safe. Darius saw that he was abusing his power and should treat his subjects better. He learned to be stronger too. Soon Darius (really Cyrus) allowed all the Jews to go back to Jerusalem.

Did you find out what you wanted to know about Daniel in the lion’s den? Let us know in the comments!

The Persians and the Jews
More about the Persian Empire
Alexander and the Maccabees
Quatr.us home