According to the Bible, Esther (ESS-ter) was a Jewish woman who lived in the Persian Empire. That was in Iran, about 400 BC. There’s no evidence that she  really existed outside of the Bible.

What’s the Persian Empire?
Persia and the Jews
The Purim holiday
West Asian religion
All our West Asia articles

In the story, Esther’s mother and father were dead. She was living with her older cousin Mordecai, who was taking care of her. Mordecai (MORE-duh-ki) worked for the Persian king. Then King Ahasuerus (possibly the Persian king we call Artaxerxes II) held a beauty contest to find a wife. He chose Esther and married her. He didn’t know that she was Jewish, but he loved her very much.

King Ahasuerus’ vizier, Haman, was very powerful (like Jafar in the Aladdin movie). When he rode down the street on his horse, everyone bowed down. But Mordecai would not bow down to Haman (HAY-man), because he would only bow down to God.

Haman got angry and decided to kill all the Jews because of this. Mordecai was very upset, and he called for Esther. When Esther came to him, he told her that she was the only one who could save the Jews. 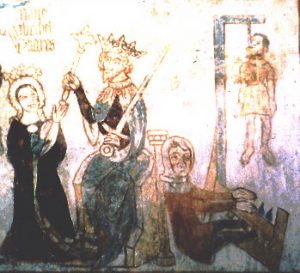 Afraid to speak up

Esther was afraid to talk to the king, and she fasted and prayed for three days before she got the courage to talk to him. But finally she asked the king to have dinner with her and Haman the next night, and the king agreed.

Meanwhile Haman had a huge gallows built outside the palace to hang Mordecai and kill him. But during dinner, Esther told the king that she was Jewish, and asked King Ahasuerus to stop Haman’s plan to kill the Jews.

The king was very angry at Haman and he told his guards to hang Haman on his own gallows. Then King Ahasuerus made Mordecai his new vizier, and Mordecai killed all of Haman’s supporters. So Jewish people kept on living in the Persian Empire for many more years. Some are still in Iran today.