When the Akkadians, from northern Iraq, conquered southern Iraq about 2400 BC, they unified all of Iraq – Mesopotamia, the land between the Tigris and Euphrates rivers – into one empire for the first time. In some ways, Akkadian art was the same as the Sumerian art that went before it. Carvings still usually had rounded shapes, recalling early clay sculptures. 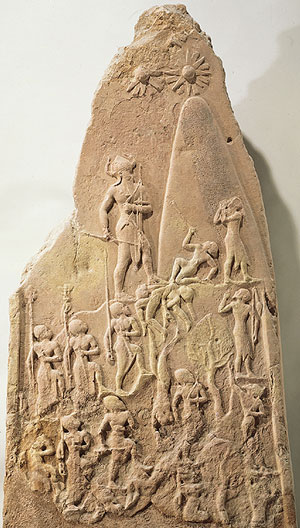 Stele of Naram-Sin (Louvre, Paris). Naram-Sin is walking up the mountain, trampling his enemies.

Because Akkadian art was all about showing how impressive the rulers were, their enemies destroyed or carried away a lot of Akkadian art after the rulers lost battles. The head of Sargon shown here had its eyes gouged out and its ears cut off. The people of Iran carried away the stele of Naram-Sin to their city at Susa, to show how they had conquered the Iraqi (Mesopotamian) people in battle.

Learn by doing: try to sculpt a portrait head of someone you know. Pro tip: don’t make it solid. Use a balloon and coat that with clay.
More about Phoenician Art