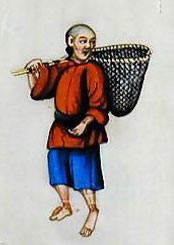 In the Qing Dynasty, most people kept on dressing the way they had before: both men and women wore mostly loose blue or black cotton shirts over loose cotton pants. But the government got more and more involved in how people should dress and wear their hair. The Qing emperors were invaders – Manchu people – and Han people in China were angry about being invaded. In order to show how powerful they were, the Qing emperors forced all the men in China to shave the front of their heads and wear the rest of their hair braided into a long braid, or queue. If you grew out your front hair, or cut off your queue, the police could tell you were against the government.

During the Qing Dynasty, Han women were still binding their feet, but Manchu women didn’t. After a while, Manchu women began to wear platform shoes so they would look more like the beautiful Han women with bound feet! Manchu women also wore long loose dresses, while Han women wore jackets and pants. Manchu men wore long moustaches, to show that they were Manchu. 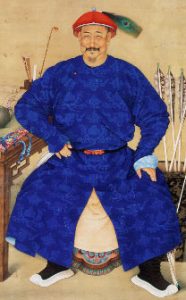 When the Qing Dynasty ended in a revolution in 1912, the new rulers of China immediately cut off their queues and grew out their shaved hair. People were happy to be free to grow their hair however they wanted! But the new Republic of China also wanted to tell people how to dress. They wanted everyone to be more modern. They made it illegal for women to bind their feet as they had done for hundreds of years. 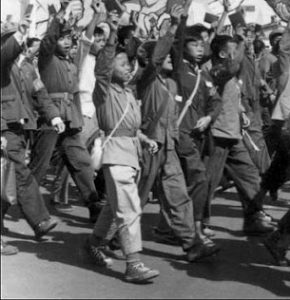 Instead, the People’s Republic wanted men and women to be equal, and to dress exactly the same. Nobody could wear long robes anymore. Both men and women, rich and poor would wear pants and jackets in blue or black and cut their hair short. That way everyone would be equal. 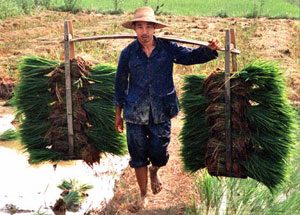 A rice farmer in modern China

After Mao Tse-Tung died in 1976, the government of China relaxed a little about clothes. Today, most people in China still wear plain jackets and loose pants the way they always have, but many young people in big cities wear fashionable modern clothing: jeans and t-shirts, or European-style business suits.

What about ancient Chinese clothing?