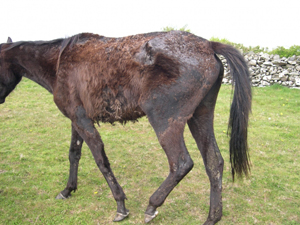 In this story, Koca Yusuf was a poor man who worked in the horse stables of the powerful Bey of Bolu. One day, Koca Yusuf saw a young filly (a girl horse). This horse had not had enough food and was very skinny and didn’t look like anything special. But Koca Yusef knew horses, and he could see that if you fed her right, this would be a really great horse.

Koca Yusef showed the young horse to the Bey of Bolu. Yusef told the Bey that this horse would make a wonderful present for the Sultan. But the Bey of Bolu didn’t know much about horses. He just saw a skinny, no-good-looking horse. He thought Koca Yusef was making fun of him. The angry Bey ordered his soldiers to poke out Koca Yusef’s eyes and blind him. Terrible!

Now Koca Yusef had a young son, whose name was Rusen Ali, but now people called Rusen Ali “Koroglu”, meaning “Son of the Blind Man”. Koroglu grew up hating the cruel and foolish Bey of Bolu. And he kept taking care of the mare, Kirat, and indeed once she got some good food to eat, the horse grew up strong and fast and really special.

When Koca Yusuf died, he told his son to avenge him against the Bey of Bolu. Koroglu has no army, so he and his followers raid and plunder the Bey’s land, and then flee before the Bey can catch them.

But one day, traders bring a new weapon to Central Asia – gunpowder and cannons. All the Beys begin fighting each other with the new cannons. Koroglu sadly realizes that even if he won his fight against the Bey of Bolu, the old world of horse fighting is gone forever. He tells his followers to leave him and wanders off alone with his horse Kirat. It’s a tragedy.

More about gunpowder and early guns