Where do Thanksgiving foods come from?

Most of the food we eat for Thanksgiving dinner is Native food, because this is a tradition that goes back to Native harvest feasts a thousand years or more before European settlers arrived.  But some favorites come from other continents; the whole world is represented on American Thanksgiving tables. A short run-down of where all these foods came from, and when they reached North America:

Turkey, of course, is at the center of many people’s Thanksgiving dinners. There were turkeys at the famous Pilgrim Thanksgiving, but those were wild turkeys, smaller and skinnier. You can still see them in the Northeast today, just walking or flying around. The big fat domesticated turkeys we usually eat, though, are related but different birds.

Those were domesticated in Central America, about 800 BC, probably as much for their feathers as for their meat. Slowly people started to keep domesticated turkeys further north: in Mexico, then by around 200 BC in the Pueblo zone of modern Arizona, New Mexico, Colorado and Utah, and in Cherokee towns in Arkansas by about 1200 AD. In the 1500s, Spanish traders brought Mexican turkeys on ships to Europe, where they were expensive and exciting, so people ate them for holidays. The first domesticated turkeys came back to the American colonies on ships from England. 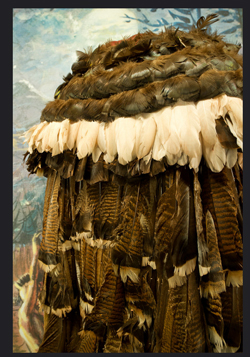 Cherokee feather cloak (Now in Museum of the Cherokee Indian)

At the early Thanksgiving feasts, people also ate a lot of seafood, especially oysters and lobster. The Lenape who lived around Manhattan and Long Island controlled the huge oyster beds there. Further north, in Massachusetts and Maine, lobsters were delicious and easy to catch. As long as Thanksgiving was mostly celebrated along the East Coast, seafood remained a big part of it. But after the Civil War, as Thanksgiving spread to the Midwest and the Plains, where there was no fresh seafood, people moved away from that tradition. 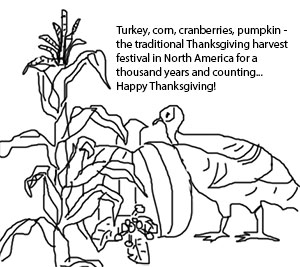 Corn was also domesticated in southern Mexico, but much earlier than turkey, about 7500 BC. People cooked corn into mush/grits, or into tortillas and tacos. Corn moved north slowly, because farmers had to breed varieties that could grow in colder places with shorter growing seasons.

Where does corn come from?
The Green Corn ceremony
The Three Sisters

Corn reached the Pueblo people about 1 AD, and the Iroquois in New York State about 1000 AD. (It’s still pretty hard to grow corn in New York!). As soon as European settlers arrived, Native people showed them how to grow corn. The Europeans mostly made pudding and mush too, but for special occasions they made the corn into something like the bread they had eaten in Europe – cornbread.

Cranberries are native to the Northeast, so Native people like the Iroquois ate a lot of them. Of course when Europeans arrived, they started to eat cranberries too. Cranberries come ripe in October and early November, perfect for Thanksgiving! The whole East Coast was covered with chestnut trees, too, so people ate a lot of chestnuts, and so did European settlers when they arrived. But about 1900 AD, European ships brought a new chestnut fungus to North America from Asia, and pretty much all the chestnut trees died. So most people don’t eat chestnuts for Thanksgiving anymore, but we still have cranberries. 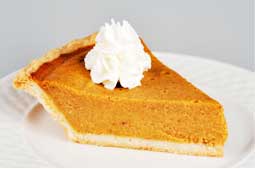 People in Central America started growing their own sweet potatoes a long time ago, about 3000 BC. From there, they spread north to the Pueblo and the Cherokee, growing all over the South, wherever it was warm enough. You couldn’t grow sweet potatoes in the Northeast, so they were not part of the Pilgrim Thanksgiving.

African-Americans also introduced macaroni and cheese to Thanksgiving. Pasta noodles were new to America after the Civil War, brought by Italian immigrants. At that time, racists were reluctant to accept Italian immigrants as white, and many of them settled in black neighborhoods and worked alongside black people. Their special celebration foods became black celebration foods too – at that time, cheese and eggs were expensive, so macaroni and cheese was a special treat.

Squash (including pumpkins, which are a kind of squash) comes from Central America, like corn. People domesticated it along the Pacific coast of South America about 10,000 BC, but originally to use as gourds and fishing floats, not for food. They started to eat domesticated squash about 3000 BC. Squash reached North America about 100 AD, when Pueblo people started to grow them. Squash-growing slowly moved north and east, reaching the Iroquois about 1000 AD, about the same time as corn. So again, when Europeans arrived, the Iroquois showed them how to grow both corn and squash.

Potatoes come from South America, where they were first domesticated about 8000 BC in Peru, in the Andes Mountains. But they didn’t spread north from there. Like turkeys, white potatoes reached European settlers on the Atlantic coast by way of Europe, in the 1800s, when German immigrants brought them over. So potatoes were also new and exciting when Thanksgiving first became a federal holiday, and African-Americans adopted potato salad as part of their meal. 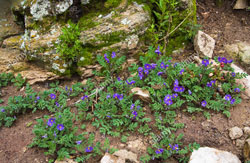 (Other Native foods didn’t make it into our Thanksgiving meals: sunflower seeds, chocolate, pinto beans, and peanuts, tomatoes, peppers, or salmon. That’s probably because tomatoes and peppers were harder to grow along the north Atlantic coast, and had gone by before Thanksgiving. Salmon was known mainly on the West Coast, which was not yet part of the United States when people were deciding the Thanksgiving menu. I don’t know why we don’t eat beans or peanuts or chocolate for Thanksgiving!)

The only Asian food we eat for Thanksgiving is apples; they come originally from Central Asia, around Afghanistan and northern Iran. European settlers brought apple trees to North America in the 1600s, not because they liked apples or apple pie so much, but because they used lots and lots of apples to make alcoholic cider. That was the main alcoholic drink of England, even more than beer, so the American colonists drank cider with their Thanksgiving meal. In the early 1800s, Johnny Appleseed spread apple orchards all across North America. But in the early 1900s, Prohibition made hard cider illegal. Suddenly the country had all these apples left over.

The US government encouraged people to eat apples instead – that’s where we get all this “apple for the teacher” and “apple a day” slogans. And apple pies for Thanksgiving. (When Prohibition ended, it was easier to make beer from grain than to wait for new apple orchards to grow, and Americans switched to beer.) 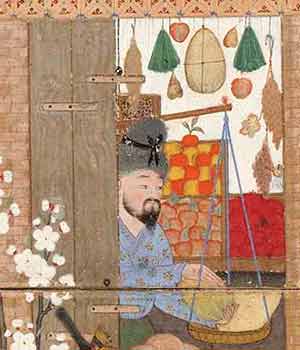 Shop with apples and other fruit on display: Mir Sayyid ‘Ali,”Nighttime in a Palace,” detail,Safavid or Mughal, ca. 1570 AD (now at Harvard)

It’s not common everywhere, but in the South and at black Thanksgiving celebrations across the country, peach cobbler is also a Thanksgiving food. That rounds out our tour of the continents, because peaches come originally from China. Peaches reached Europe under the Roman Empire, and came to America with Spanish settlers in Florida in the 1500s.

Peaches growing on a peach tree

So the oldest things on our Thanksgiving plates are cranberries, followed by pumpkin and corn. Central Asian apples are probably next, and then turkey. Sweet potatoes, white potatoes, and mac and cheese all joined in the late 1800s, around the time that Thanksgiving became an official Federal holiday during the Civil War. Chinese peaches may have joined even later than that.