Julian the Apostate and nostalgia

On this day – November 6, 355 AD – Constantius died, and Julian became the official Roman emperor. Julian immediately came out of the closet as a follower of the old Roman gods, not the Christian he had been pretending to be for Constantius’ sake (and to stay alive). Julian ordered Roman officials to start up the old pagan animal sacrifices again.

More about Constantius and Julian
History of Christianity
Antiquity timeline

But what Julian failed to understand was that the whole world had changed. It wasn’t just a matter of Christianity. Christianity was one manifestation of a larger shift in the way people thought about religion, where they were moving – not just in the Roman Empire, but all over Eurasia – to a different relationship with their gods and their government. People especially were looking for a different relationship between the gods and the government. 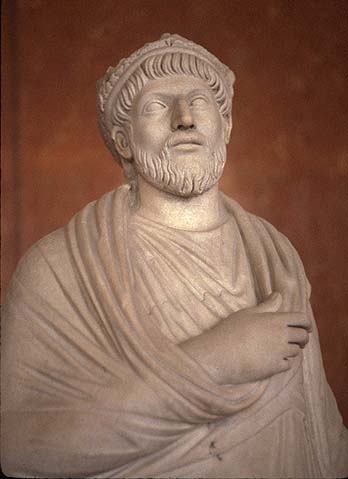 But the change had started about a thousand years earlier, when the Persian Empire formed. Around the time that they pulled together the world’s first big empire, Persian rulers adopted a new religion, Zoroastrianism. What was tempting about Zoroastrianism? First, it divided the world into good and evil, with humans in the middle, and the gods fighting over them. That seemed appropriate to people living in a big, safe empire, and fearing distant, wild enemies they hardly knew. (As opposed to fighting people in the next city over, where you each had your city god on your side.) Second, Zoroastrianism de-emphasized animal sacrifice.

Not long afterwards, the Buddha started preaching in India. Buddhism created an idea of religion separate from the government: a big world religion, bigger even than empires. Buddhists also didn’t do so much animal sacrifice. Buddhism spread east to China, Korea, Japan, Southeast Asia, and Indonesia. Most of East Asia became Buddhist. And Buddhism also spread west, so that many people in the Parthian Empire in the time of Jesus were also Buddhists. Most of the rest were Zoroastrians. So when the Roman Empire expanded into Southwest Asia, in the first century BC, these new religious attitudes reached out to them as well. Early Christianity is essentially the result: a mix of Zoroastrian and Buddhist ideas with the religious ideas of the Eastern Mediterranean (Jewish and Egyptian), as a way of coping with being in the Roman Empire.

The end of animal sacrifice

Over the next few hundred years, these ideas spread further west into North Africa and Europe, and more and more people changed their religious thinking. By the time Julian came along, it was far too late. Hundreds of years of shifting attitudes had gone into Christianity. Julian could never have convinced people to go back to the old attitudes. In fact, Julian himself followed many of the new ideas of Neoplatonism, which was another aspect of these new religious ideas.

There’s a lesson in this for today, I think: when people change their whole way of thinking about the world, that’s not something you can just stuff back in the bottle. Today, people have come to a basic understanding that all people are equally human. None of them should be enslaved, or kept from voting or marrying, or made to do unpaid housework, so that others can have more privilege. We have not implemented many of the necessary changes yet, and we may not even be sure what those changes are, but we’re pretty much agreed on the principle. Maybe I’m too optimistic, but I think the changes will keep coming. (Maybe I just feel optimistic today because of the Democrats taking Virginia last night!)

As this whole shift started with Zoroastrianism, it seems right to end this post with an image of Zoroastrianism crushing Julian, as indeed it did in the end: Julian died fighting the Sassanians, whose leaders were Zoroastrians, in 361 AD, only a few years after he became emperor. As soon as he died, the Roman Empire went back to Christianity, where it stayed until most of it converted to Islam, a few hundred years later. 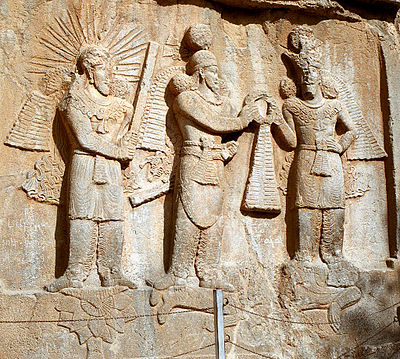 A less uplifting view of Julian: Ardeshir II gets his crown from the god Mithra and Shapur II, who are walking on the dead Roman emperor Julian