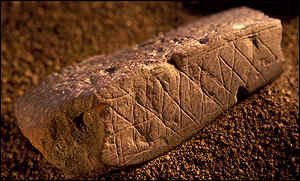 People were producing art in South Africa even before the first people left Africa for other parts of the world. The earliest art we know about comes from Blombos Cave in South Africa, where there are carvings and bead jewelry from about 80,000 BC.

After that, however, there’s a big gap. By about 27,000 BC, San people, also in South Africa, may have been painting pictures of people and animals on rock walls (It’s hard to date rock walls.). 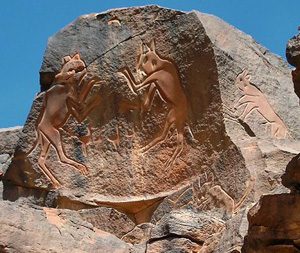 African creative work picks up steam when we begin to find art made in northern Africa. First there are rock carvings of animals in the Sahara Desert, possibly as early as 10,000 BC or so.

These rock carvings are found all the way across the Sahara Desert, from Egypt to Niger. Some of the carvings show people, while others show cats or giraffes or other animals.

In Nubia (modern Sudan), there are rock carvings from about 4000 BC. These Saharan carvings are the ancestors of later Egyptian carvings. The figures are carved in profile (seen from the side), and they stand one picture on top of another in registers (like comic strips). 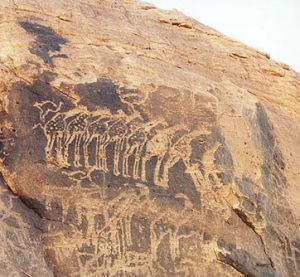 By 3000 BC, Egyptian artists were doing very similar carving, but thanks to farming Egypt was richer and could afford better trained artists and more time spent on each carving.

The tomb carvings in the Pyramids and other tombs from Old Kingdom Egypt are also carved in stone, in profile, and in registers, but they are carved on built stone walls, instead of into natural rock.

By about 2500 BC, the artists of Kerma (along the Nile River in northern Sudan) were producing art in styles related to the Egyptian art to their north. 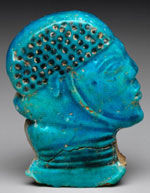 Ceramic head from Kerma (modern Sudan), about 1600 BC.

Like the Egyptians, the artists of Kerma made blue faience statuettes. But the Kerma statuettes clearly show African hair and features.

Or check out this article on African art in the Encyclopedia Britannica (unfortunately there’s not much on early African art though).