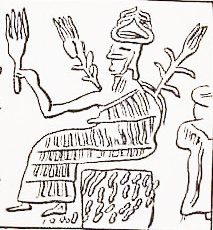 The god Tammuz (probably) with grain growing from his shoulders

Tammuz (or Dumuzi) was a West Asian god who personified growing food, like Persephone in Greece or Osiris in Egypt. Like Osiris, Tammuz was male. The Sumerians worshipped Tammuz as early as 2600 BC – and probably much earlier – and so did all the other people of West Asia, including the Jews (the Bible warns against it).

The god Tammuz was Ishtar‘s husband. When Ishtar went down to the underworld, her bad sister Ereshkigal, the Queen of the Underworld, captured Ishtar and held her prisoner there. Tammuz agreed to go down the underworld – to die – in exchange for Ishtar’s release. He cried and said goodbye to his good sister Geshtinana, and his dogs, and his lambs (he was a shepherd), and to Ishtar. But his sister Geshtinana went down to the underworld to find him, and in the end Ishtar agreed that Tammuz would only have to stay in the underworld for half the year, and he could spend the other half with Ishtar – Geshtinana takes his place for the other half of the year.

For the Sumerians, Tammuz was a shepherd. They celebrated his marriage to Ishtar every year in February or March, and they mourned his death in March or April, when it gets too hot in Mesopotamia for grass to grow. But as the people of West Asia got more into farming, Tammuz became identified more with grain than with grass.

A grain god who dies and is reborn

By the Assyrian period, about 1000 BC, West Asian people held ten days of mourning for Tammuz every year at the beginning of summer, to mark the time after the wheat harvest when Tammuz – now the personification of the wheat – went back down under the earth. Women cried and sang laments, as Ishtar cried for her husband when he was in the underworld. Ezekiel, in the Bible, mentions women sitting at the door of the Temple “weeping for Tammuz”. Women in Syria and Iraq were still mourning Tammuz every summer two thousand years later, in the Middle Ages, though they had forgotten why. Even today the month of July is still called “Tammuz” in some dialects of Arabic.

Did you find out what you wanted to know about the god Tammuz? Let us know in the comments!

Learn by doing: compare the story of Persephone
More about Ishtar

Bibliography and further reading about Tammuz: