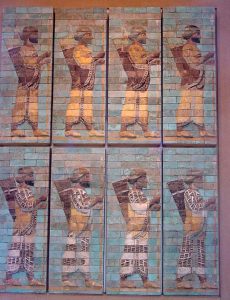 Molded brick relief of Persian archers, from Susa in the 400s BC

But instead of the guardian spirit bulls that were on the Ishtar Gate, now the Persian king shows his army defending him. There are rows of archers carrying their bows and their quivers and their arrows. 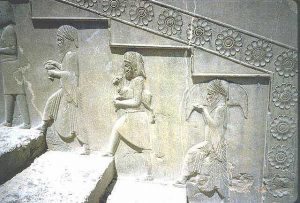 Stone relief carving from the Persian king’s palace at Persepolis, showing subjects bringing tribute and gifts to the king (400s BC)

And this is a Persian version of a stone relief (from Persepolis). Greek sculptors came to Persepolis all the way from Athens and Thebes to work on this relief alongside Persian sculptors. 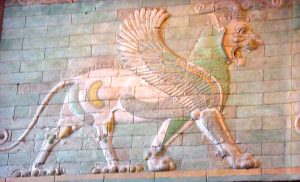 Here is a clay Persian lion; I think it looks almost Chinese. That shade of green looks Chinese to me, and so do the spread-out feet. The Iranians traded with China along the Silk Road. I think it shows in some of their art.

After the Persians, Alexander the Great conquered West Asia in 331 BC, and Greek art became popular in West Asia(especially with the many Greeks who came to live in West Asia at this time). Some objects look totally Greek, others look more Asian, and some are a mixture of styles.

From the synagogue at Dura-Europos in Roman territory (see the togas?)

Then around the 100s BC the Romans took over the Mediterranean coast of West Asia, while the Parthians took over the rest of West Asia. Both left many important artworks.  As you might expect, Parthian art looks a little more Indian and Chinese than Roman art does. But in many ways they are also very similar. For both groups, art was mostly about images of men conquering things, or men who are ruling their country or their province. 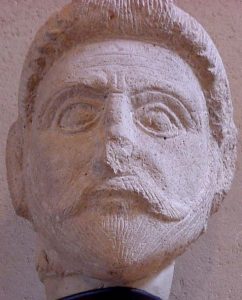 Around 220 AD the Parthians were taken over by the Sassanians, who continued artwork in more or less the same way.

Finally, the whole area was taken over by the Islamic empire in the 600s AD.