Assurbanipal in the garden (see his enemy’s head hanging in the tree?)

One of the Seven Wonders

Nobody knows for sure when or where the Hanging Gardens of Babylon were built. But they were already famous as one of the Seven Wonders of the World in the Hellenistic period, about 200 BC. The most likely explanation is that the gardens were part of the palace of the Assyrian king Sennacherib in Nineveh.

Who were the Assyrians?
Iron Age timeline 1000-500 BC
West Asian science and math
All our West Asia articles

The gardens of Sennacherib

About 700 BC, Sennacherib built a big, beautiful palace in Nineveh. And he built gardens to go with his palace. The water to feed the gardens came from a fancy system of eighteen canals, with an aqueduct at least forty miles long. But Nineveh was on top of a hill. It was hard to get the water far enough up the hill to water the garden.

Invention of the screw pump

Many people think that Sennacherib’s architects designed the first screw pumps to solve this problem. The new screw pumps were exciting. So that’s why Greek writers included Sennacherib’s garden in the Seven Wonders of the World.

What is a screw pump? 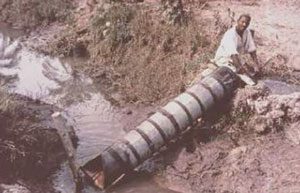 Using a screw pump for irrigation

How did these pumps work?

The wooden screw pumps were carved out of sections of logs, where the outside of the log stayed in one piece, and you carved the inside into the shape of a screw – a spiral. Or possibly the inside screw was cast in bronze. Either way, the whole cylinder turned, and as water moved up the spiral eventually it came out the top. There it entered a second screw pump, and so water gradually moved up the hill to water the plants at the top.

So if it’s in Nineveh, why was it called the Hanging Gardens of Babylon? Apparently the Assyrians used “Babylon”, which means “Gate of the Gods”, for Nineveh and other cities as well as for the city we call Babylon.

Learn by doing: get a kit for a screw pump
More about the Assyrians
More about screws and simple machines
Another wonder of the world: the Pyramids

Bibliography and further reading about the Hanging Gardens of Babylon: