Volume of a cone – Geometry 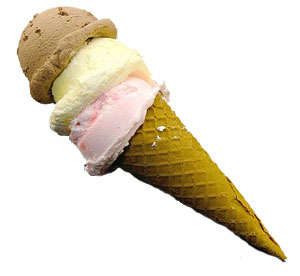 How much ice cream fits inside this cone?

A cone is the set of all the line segments that start from one circle and go to a point not on the circle. You could think of a cone as being a pyramid with a circular base.

This ice cream cone is an example of a right cone. To find the surface area of a cone (suppose you wanted to dip the cone in chocolate and you needed to know how much chocolate would cover the whole cone?), you would need to know the length of the line segment running from the edge of the circular base to the point of the cone. In a right cone, this is the hypotenuse of the right triangle formed by the base and the height of the cone, so you could use the Pythagorean Theorem to figure it out. Then multiply that hypotenuse by the radius of the cone, multiplied by π to get the surface area.

But suppose you wanted to fill the cone with ice cream? How much ice cream would you need? To find out, you’d have to figure out the volume of the cone. You do that by calculating the volume of the cylinder it’s inside (the area of the base multiplied by the height), and then dividing by three, just as you do with a pyramid. Since the area of a circle is πr2, the volume of a cone is 1/3 πr2h.

Learn by doing: go get some ice cream!
More about Geometry