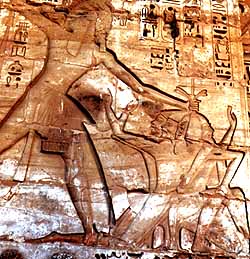 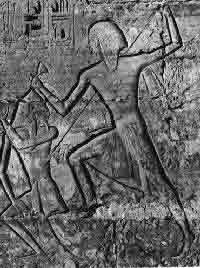 After Amarna, around 1200 BC, Ramses and his successors brought in new interests to art, where the main idea was to be very big and impressive, even if the details were not so fine. Reliefs are cut into the stone, instead of the background being cut away as they were in Old Kingdom art.

New Kingdom artists, and their audiences, liked a loose, enthusiastic style, more than the old tightness and precision. And, because the Egyptians were doing a lot of conquering at this time, the reliefs often show wars or prisoners.

But with the collapse of the New Kingdom into the Third Intermediate Period about 1200-1100 BC, Egypt became a much poorer country. Nobody in Egypt was rich enough anymore to pay for temples and giant sculptures, and hardly any were done. Artists and sculptors moved to other, richer countries like Assyria where they could find work.