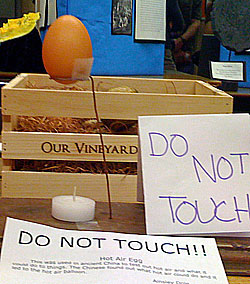 Scientists in China were early leaders in the investigation of hot air and how you could use the fact that hot air rises to lift things off the ground.

Why does hot air rise?
Molecules and heat
All our physics articles
Chinese science and math
All our China articles

One early experiment, reported by the Chinese book Ten Thousand Infallible Arts of the Prince of Huai-Nan, was to blow out an egg and then push burning weeds inside it, so that the egg would fill with hot air. People said that the egg would then rise into the air, but this is probably not true. In any case, this project is a model showing the experiment.

How did eggs evolve?